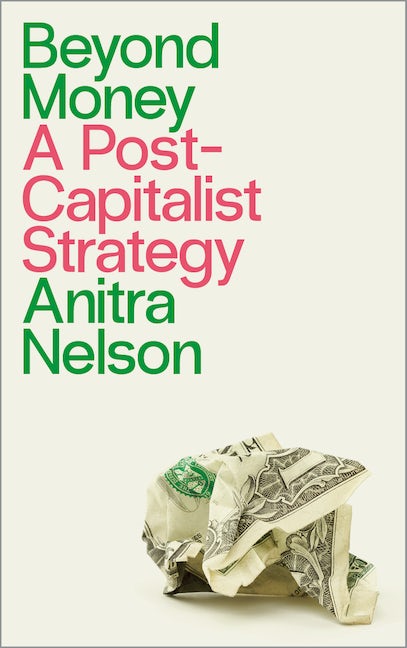 In order to overcome environmental and social crises, we must move beyond money

What would a world without money look like? This book is a lively thought experiment that deepens our understanding of how money is the driver of political power, environmental destruction and social inequality today, arguing that it has to be abolished rather than repurposed to achieve a postcapitalist future.

Grounded in historical debates about money, Anitra Nelson draws on a spectrum of political and economic thought and activism, including feminism, ecoanarchism, degrowth, permaculture, autonomism, Marxism and ecosocialism. Looking to Indigenous rights activism and the defence of commons, an international network of activists engaged in a fight for a money-free society emerges.

Beyond Money shows that, by organising around post-money versions of the future, activists have a hope of creating a world that embodies their radical values and visions.

Anitra Nelson is Honorary Principal Fellow at the Informal Urbanism Research Hub (InfUr-), University of Melbourne, Australia and co-author of Exploring Degrowth, co-editor of Life Without Money and author of Marx's Concept of Money.

'Outstanding ... a highly original and incisive analysis of the crippling role that money plays in today’s global capitalist world'

'A book for our time. Anitra Nelson takes us from theory to praxis in clear steps. Nelson’s turn towards a materialist ecofeminist analysis is pure joy'

‘Takes monetised economies head-on, demonstrating how they exacerbate ecological devastation and socio-economic inequality, and provides examples and pathways towards non-monetary economies based on real values. Does a great service to movements seeking social and ecological justice for all humans and other life forms’

- Ashish Kothari, founder of Kalpavriksh and co-editor of 'Pluriverse'

'Challenges and inspires - a spur to action'

- Helena Norberg-Hodge, author of 'Ancient Futures' and winner of the Alternative Nobel prize

'It is easier to imagine the end of capitalism than the end of money. Anitra Nelson's book challenges us to think what viable postcapitalisms without money could look like'

'If you had to choose one book to read on making the next political economy it should be this one. It will have you bristling with political energy'

'An accessible and important book. If you want an alternative to economic and environmental disasters, you need to engage with her arguments'

'A passionate critique of money as the root cause of our many problems, presenting a clear vision of how life without money could look like. Inspiring'

- Matthias Schmelzer is a postdoctoral researcher at the Friedrich-Schiller-University Jena. He is the author of The Hegemony of Growth (Cambridge University Press, 2016) and The Future is Degrowth (Verso, 2022)

'With a compelling narrative, Nelson lays out the unavoidable question of today's anti-capitalist, ecological politics - the question of money. Grounded in long-term political experience, her answer is at once elaborate and unequivocal: a wonderful tool for radical imagination and praxis'

- Stefania Barca, author of 'Forces of Reproduction' and 'Workers of the Earth'

'An exciting, original book that, in exploring the ritual structure of assets, capital, money and profit, helps open a way for more powerful, creative resistance'

'Can capitalism be overcome without challenging money? In this thought-provoking book, Anitra Nelson argues that moving beyond money is necessary for addressing inequalities and environmental unsustainability and shows what a non-monetary postcapitalist world might look like.'

'Alternatives to capitalism, price-making markets and monetary values are essential for social-ecological transformation. Going well beyond typical economic discourse she opens the door of human potentiality to a different way of life'