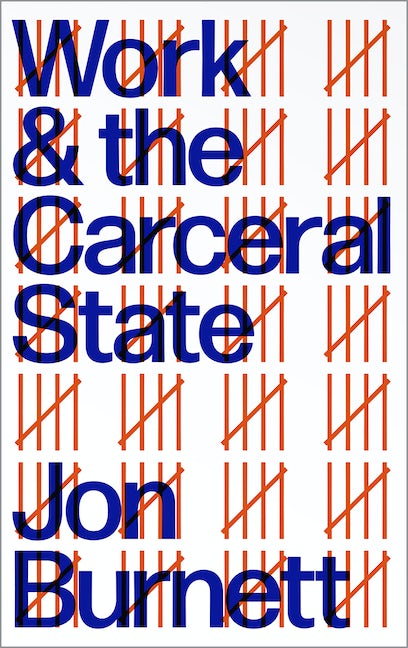 Work and the Carceral State

The politics of punishment meet labour exploitation in this new analysis

'Revolutionises our understanding of the carceral state' - Fidelis Chebe, Director of Migrant Action

During 2019-20 in England and Wales, over 17 million hours of labour were carried out by more than 12,500 people incarcerated in prisons, while many people in immigration removal centres also worked. In many cases, such workers constitute a sub-waged, captive workforce who are discarded by the state when done with.

Work and the Carceral State examines these forms of work as part of a broader exploration of the relationship between criminalisation, criminal justice, immigration policy and labour, tracing their lineage through the histories of transportation and banishment, of houses of correction and prisons, to the contemporary production of work.

Criminalisation has been used to enforce work and to discipline labour throughout the history of England and Wales. This book demands that we recognise the carceral state as operating at the frontier of labour control in the 21st century.

Jon Burnett is a Lecturer in Criminology at the University of Swansea. He has written for a variety of publications including the Guardian, Race & Class and Open Democracy. He is the co-editor of the journal Justice, Power and Resistance.

'This book is an illuminating interrogation into captive labour, disposable workforce and state harm. Grasping the intricacies of labour, immigration, capital and criminalisation, this thought-provoking work will revolutionise our understanding of the carceral state'

'A magnificent piece of scholarship. It is eloquently written, meticulously researched and filled with profound insights: an instant classic'

- Dr David Scott, The Open University and author of 'For Abolition'

- Avery F. Gordon Visiting Professor Birkbeck School of Law and author of 'The Hawthorn Archive: Letters from the Utopian Margins'

'Brilliant - shows how carceral labour shapes the world of work in ways that are more important than we have ever acknowledged, and adds an indispensable dimension to our understanding of capitalism. Read this book and learn how the strategies deployed in prisons and in immigration detention centres spread into labour markets in ways that discipline all of us'

- David Whyte, Professor of Socio-Legal Studies at the University of Liverpool and co-editor of 'The Violence of Austerity'

'Compelling, compassionate and original. It highlights the hidden scandal of, and resistance to, carceral labour in the haunted environment of immigration removal centres'

'Academically rigorous, rich in detail and makes an important contribution to our understanding of carceral labour’

'Brings debates on prison labour to a new level of theoretical sophistication, insightfully exploring its modern-day, reworked manifestations across the various spheres of the carceral state and laying bare its crucial role as a form of statecraft'

- José A. Brandariz, Professor of Criminal Law and Criminology, University of A Coruna, Spain