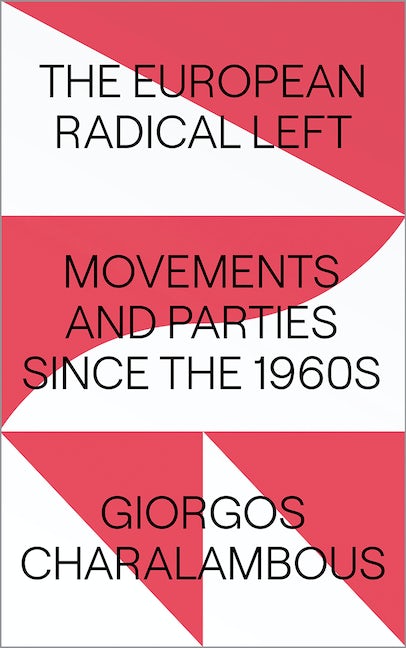 Movements and Parties since the 1960s

Is today's left really new? How has the European radical left evolved?

Giorgos Charalambous answers these questions by looking at three moments of rapid political change - the late 1960s to late 1970s; the turn of the millennium; and post-2008. He challenges the conventional understanding of a 'new left', drawing out continuities with earlier movements and parties.

Charalambous examines the 'Long '68', symbolised by the May uprisings in France, which saw the rise of new left forces and the widespread criticism by younger radical activists of traditional communist and socialist parties. He puts this side by side with the turn of the millennium when the Global Justice Movement rose to prominence and changed the face of the international left, and also the period after the financial crash of 2008 and the rise of anti-austerity politics which initiated the most recent wave of new left parties such as Podemos in Spain and Syriza in Greece.

With a unique 'two-level' perspective, Charalambous approaches the left through both social movements and party politics, looking at identities, rhetoric and organisation, and bringing a fresh new approach to radical history, as well as assessing challenges for both activists and scholars.

Giorgos Charalambous is Assistant Professor of Political Science at the Department of Politics and Governance, University of Nicosia. He is also the co-convenor of the Left Radicalism Specialist Group at the Political Studies Association. Charalambous is the author of European Integration and the Communist Dilemma (Ashgate, 2013), and has co-edited Party-Society Relations in Cyprus (Routledge, 2016) and Left Radicalism and Populism in Europe (Routledge, 2019).

'A rare and nothing less than perfect example of the Radical Left in Europe. It not only helps one to understand the cauldron of European politics but also contributes to a much needed (re) interpretation of the political itself'

'The concept of ‘newness’ framing Charalambous’ sophisticated historical sociology, magnifies the significance of the New Left for subsequent mobilisations and gives serious consideration to anarchism in movement activism’

'This interesting volume investigates the identity, rhetoric and organisation of the radical left, looking at the legacies of the past, but also to the capacity for innovation during three recent waves of protest’

- Donatella Della Porta, Professor of Political Science and Dean of the Faculty of Political and Social Sciences at the Scuola Normale Superiore, Florence

'Astutely follows debates surrounding radical democracy, solidarity, internationalism, universalism, nationalism and anti-capitalism. Anyone interested in the trajectory of the European radical left will benefit enormously from reading this volume'

- Stefan Berger, Professor of Social History and Director of the Institute for Social Movements at Ruhr-Universitaet Bochum, Germany

‘Proposes a new way to understand the European radical left […] An exciting work of scholarship, a very fresh approach’

'The ‘radical left’ has often been seen as marginal. This fascinating book reconceives it as a political family important to European political development in general. It will make readers think differently’

'The broad historical and intellectual sweep of this work opens the door to a new multifaceted analysis of the radical left. A valuable tool for understanding what is possible for the left in this tumultuous age'

- Kate Hudson, General Secretary of the Campaign for Nuclear Disarmament