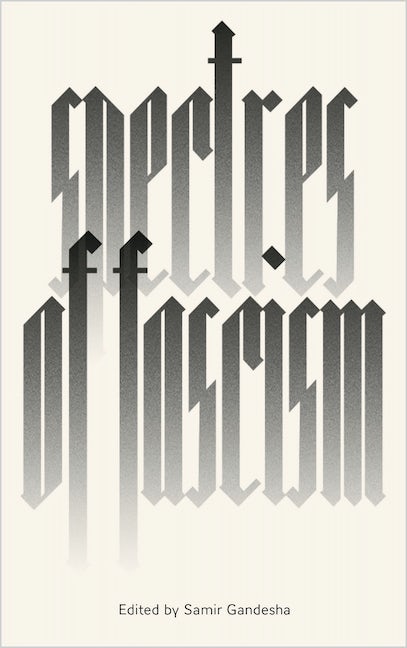 Historians and theorists debate the return of fascism, focusing on case studies from around the world.

Concerns over the rise of fascism have been preoccupied with the Trump presidency and the Brexit vote in the UK, yet, globally, we are witnessing a turn towards anti-democratic and illiberal forces.

From the tragic denouement of the Egyptian Revolution to the consolidation of the so-called Gujarat Model in India under the leadership of Prime Minister Narendra Modi and the consolidation of the power of Turkish President Recep Tayyip Erdogan, to the recent election of Jair Bolsonaro in Brazil, fascist ideology, aesthetics and fascist personalities appear across the globe.

Spectres of Fascism makes a significant contribution to the unfolding discussion on whether what we are witnessing today is best understood as a return to classic twentieth-century ‘fascism,’ or some species of what has been called ‘post-fascism.’ Applying a uniquely global perspective, it combines analyses of historical contexts, theoretical approaches and contemporary geopolitics.

Samir Gandesha is Associate Professor in the Department of the Humanities at Simon Fraser University.

List of Figures
Acknowledgements
1. Introduction - Samir Gandesha
PART I - HISTORY
2. The “Hope of the Hopeless”: Contemporary Lessons from Marxist Struggles Against Hitler and Mussolini - Ingo Schmidt
3. The Future of Futurism: From the Avant-Garde to the Neo-Avant-Garde, or, How to Imagine Communism by Other Means - Jaleh Mansoor
4. The Aesthetics of Totalitarian Salvation - Alec Balasescu
5. Are the Alt-Right and French New Right Kindred Movements? - Tamir Bar-On
PART II - THEORY
6. The Post-Democratic Horizon: Friend and Enemy in the Age of New Authoritarianism - Am Johal
7. Which Came First, Fascism or Misogyny? Reading Klaus Theweleit’s Male Fantasies - Laura U. Marks
8. “A Composite of King Kong and a Suburban Barber”: Adorno’s “Freudian Theory and the Pattern of Fascist Propaganda” - Samir Gandesha
9. So, You Want a Master? Psychoanalytic Considerations on the Intellectual’s Responsibility in Light of Traumatic Repetition - Hilda Fernandez-Alvarez
10. Micro-Fascism in the Age of Trump - Gary Genosko
PART III - THE CONTEMPORARY HORIZON
11. Fascist Neoliberalism and Preventive Counter-Revolution: The Second Round of the Latin American Laboratory - Vladimir Safatle
12. Decolonizing the “Contemporary Left”?: An Indigenous Reflection on Justice in the New World Order - Patricia M. Barkaskas
13. The Outsider as Insider: Steve Bannon, Fourth Turnings, and the Neofascist Threat - Joan Braune
14. Populism, Fascism, Neoliberalism: Theorizing Contemporary India - Ajay Gudavarthy and Vijay Gudavarthy
15. Art Contra Politics: Liberal Spectacle, Fascist Resurgence - Johan F. Hartle
Notes on Contributors
Index