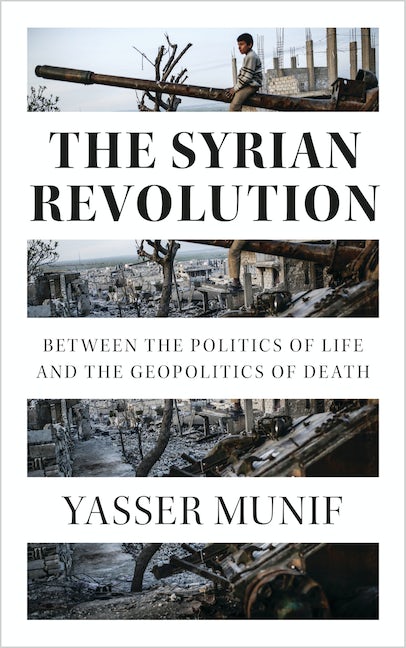 Between the Politics of Life and the Geopolitics of Death

Understanding the Syrian revolution is unthinkable without an in-depth analysis from below. Paying attention to the complex activities of the grassroots resistance, this book demands we rethink the revolution.

Having lived in Syria for over fifteen years, Yasser Munif is expert in exploring the micropolitics of revolutionary forces. He uncovers how cities are managed, how precious food is distributed and how underground resistance thrives in regions controlled by regime forces. In contrast, the macropolitics of the elite Syrian regime are undemocratic, destructive and counter-revolutionary. Regional powers, Western elites, as well as international institutions choose this macropolitical lens to apprehend the Syrian conflict. By doing so, they also choose to ignore the revolutionaries' struggles.

By looking at the interplay between the two sides, case studies of Aleppo and Manbij and numerous firsthand interviews, Yasser Munif shows us that this macro and geopolitical authoritarianism only brings death, and that by looking at the smaller picture - the local, the grassroots, the revolutionaries - we can see the politics of life emerge.

Yasser Munif is a Sociology Assistant Professor in the institute for Liberal Arts at Emerson College. He is the co-founder of the Global Campaign for Solidarity with the Syrian Revolution.

Acknowledgments
Introduction
1. Necropolitics: The Taxonomies of Death in Syria
2. The Geography of Death in Aleppo
3. Nation Against State: Popular Nationalism and the Syrian Uprising
4. The Politics of Bread and Micropolitical Resistance
5. Participatory Democracy and Micropolitics in Manbij: An Unthinkable Revolution
Conclusion
Notes
Index