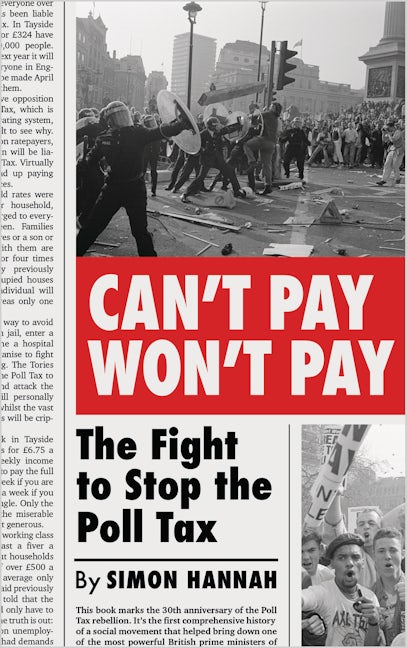 The Fight to Stop the Poll Tax

Thirty years ago, a social movement helped bring down one of the most powerful British Prime Ministers of the 20th Century. For the 30th anniversary of the Poll Tax rebellion, Simon Hannah looks back on those tumultuous days of resistance, telling the story of the people that beat the bailiffs, rioted for their rights and defied a government.

Starting in Scotland where the 'Community Charge' was first trialled, Can't Pay, Won't Pay immerses the reader in the gritty history of the rebellion. Amidst the drama of large scale protests and blockaded estates a number of key figures and groups emerge: Neil Kinnock and Tommy Sheridan; Militant, Class War and the Metropolitan Police.

Assessing this legacy today, Hannah demonstrates the centrality of the Poll Tax resistance as a key chapter in the history of British popular uprisings, Labour Party factionalism, the anti-socialist agenda and failed Tory ideology.

'A timely reminder that if the working class is to defend itself it cannot afford to wait for Labour. It must rely on its own power and independent organisation as much as holding its leaders to account'

Preface
Introduction
1. A Brief History of Tax Resistance and Revolutions
2. Why a Poll Tax?
3. Scotland
4. Debates Over Strategy
5. The Resistance Begins
6. The Battle of Trafalgar (Square)
7. A Ragtag Army
8. Endgame
9. Social Movements, Class and Strategy
Conclusion: A System Shaken or Broken?
Notes
Index

Can Don’t Pay UK be the next Poll Tax movement?

In many ways we’re seeing a similar context to the poll tax: a decade of Tory rule, massive social inequality, a government mired in corruption and reactionary ideological beliefs. But are the two non-payment campaigns as similar as they...

END_OF_DOCUMENT_TOKEN_TO_BE_REPLACED
Back to Top
X