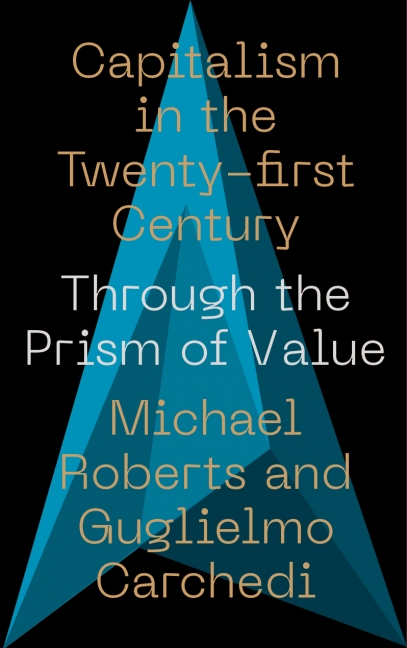 Capitalism in the 21st Century

Through the Prism of Value

by Guglielmo Carchedi and Michael Roberts

A sweeping, authoritative and accessible overview of major issues in the global economy from a Marxist perspective

Contemporary capitalism is always evolving. From digital technologies to cryptocurrencies, current trends in political economy are much discussed, but often little understood. So where can we turn for clarity? As Michael Roberts and Guglielmo Carchedi argue, new trends don't necessarily call for new theory.

In Capitalism in the 21st Century, the authors show how Marx's law of value explains numerous issues in our modern world. In both advanced economies and the periphery, value theory provides a piercing analytical framework through which we can approach topics as varied as labour, profitability, automation and AI, the environment, nature and ecology, the role of China, imperialism and the state.

This is an ambitious work that will appeal to both heterodox economists and labour movement activists alike, as it demonstrates the ongoing contemporary relevance of Marxist theory to current trends in political economy.

Guglielmo Carchedi was Professor of Economics at Amsterdam University and is the author of several works including Frontiers of Political Economy, For Another Europe and Behind the Crisis.

Michael Roberts has worked in the City of London for over 30 years as an economist and financial adviser. He is author of several books including The Great Recession, The Long Depression and Marx 200. He blogs at thenextrecession.wordpress.com.

- Rick Kuhn, author of the Deutscher Prize winning 'Henryk Grossman and the Recovery of Marxism'

'The book that the reader has in his hands is fundamental: it explains the characteristics of the current world through its most objective dimension - the theory of value - which, in an anti-dialectical way, has been forgotten by the left in recent decades. In this book economics is politics and politics is economics'

- Raquel Varela, author of 'A People's History of the Portuguese Revolution'

‘This book offers a rigorous Marxist interpretation of some of the major issues in contemporary capitalism. Its analysis is firmly based on the Marxist labour theory of value and is coupled with meticulous empirical support’

‘Two of the most accomplished and prominent Marxist authors’

‘Capitalism will always be capitalism, but in the 21st century new forms, controversies and challenges have appeared [...] This book masterfully descends to the concrete to show the strength of Marx’s law of value and the alternative socialist planning.’

‘Michael Roberts and Guglielmo Carchedi restate Marx’s critique of political economy for today, displaying formidable theoretical rigour and command of the empirical evidence. They offer challenging analyses of ecological catastrophe, economic crises, imperialism, robots, and socialism from which everyone will learn.’