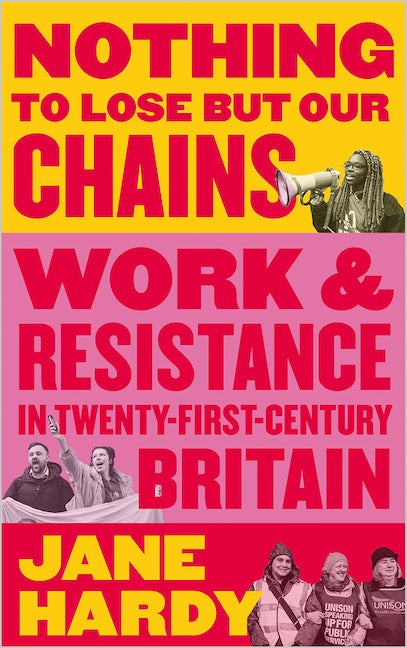 Nothing to Lose But Our Chains

Work and Resistance in Twenty-First-Century Britain

Since capitalism began, British workers have always fought for their rights. Today it's no different.

Capitalism is a dynamic system, continually adapting itself to exploit workers in new ways. In Britain today, the gig economy is its newest form, expressed through precarious contracts and the supposed atomisation of workers. In this book, Jane Hardy argues that despite capitalism’s best efforts to stop us, we can always find ways to fight it.

Through a range of case studies, from cleaners to university lecturers, Hardy looks at how workers are challenging employers’ assaults in the neoliberal workplace, comparing these new actions to a long history of British working class struggle. She explores the historic role of migrants in the British workforce, from the Windrush generation to more recent arrivals from the European Union, as well as placing womens’ collective action centre stage. Analysing the rise of robotics and artificial intelligence, she refutes claims that we are entering a post-capitalist society.

Nothing to Lose but our Chains is an optimistic exploration into the power of the working class, showing that no matter what tools capitalism uses, it can always be resisted.

- John McDonnell, Member of Parliament for Hayes and Harlington

'Shows the stark reality that, while we have developed more creative ways of winning and seem to be winning more, the impact of capitalism and exploitation of workers hasn't changed very much at all'

'A much-needed look at one of the biggest issues for employment relations research and trade unions today: precarious workers. Any study of contemporary union organising that embraces rank and file militancy as a way of building networks of solidarity is a welcome contribution to the debate'

'We have a decision to make: we can sit back and hope the trade unionists of tomorrow will emerge, or we can fight together for the future the next generation deserves. ‘Nothing To Lose But Our Chains’ inspires us with contemporary and ongoing tales of fighting and winning'

'A welcome reassertion of the crucial inter-relationship of gender and class in the struggle between labour and capital, placing recent industrial action by women workers centre stage'

Despite media narratives to the contrary, British workers are finding ways to fight for their rights under the dual tyranny of the capitalist class and Covid-19.

END_OF_DOCUMENT_TOKEN_TO_BE_REPLACED
Back to Top
X