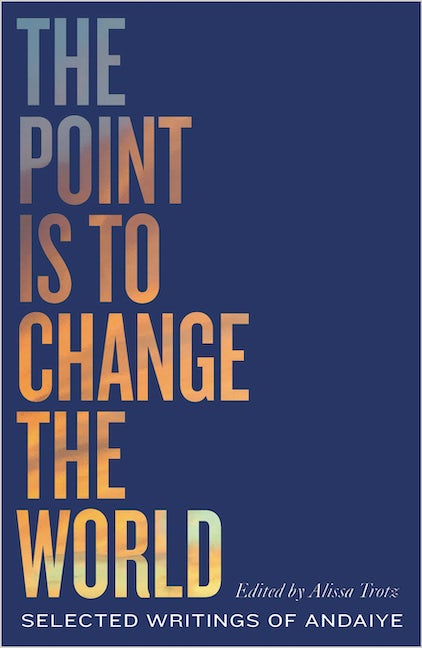 The Point is to Change the World

An inspiring collection from one of the Caribbean's most vital political figures.

Radical activist, thinker, comrade of Walter Rodney, Andaiye was one of the Caribbean's most important political voices. For the first time, her writings are published in one collection.

Through essays, speeches, letters and journal entries, Andaiye's thinking on the intersections of gender, race, class and power are profoundly articulated, Caribbean histories emerge, and stories from a life lived at the barricades are revealed. We learn about the early years of the Working People's Alliance, the meaning and impact of the murder of Walter Rodney and the fall of the Grenada Revolution. Throughout, we bear witness to Andaiye's acute understanding of politics rooted in communities and the daily lives of so-called ordinary people.

Featuring forewords by Clem Seecharan, Robin DG Kelley and Honor Ford-Smith, these texts will become vital tools in our own struggles to 'overturn the power relations which are embedded in every unequal facet of our lives'.

Andaiye (1942 -2019) was a Guyanese social, political, and gender rights activist, who has been described as a transformative figure in the region's political struggle. She was an early member of the executive of the Working People's Alliance (WPA) in Guyana, alongside Walter Rodney. A founding member of the women's development organisation Red Thread in Guyana in 1986, Andaiye was also an executive member of the Caribbean Association for Feminist Research and Action (CAFRA).

'Andaiye was the most important Caribbean woman intellectual-activist of the generation of Walter Rodney. Her subtle, river-clear, loving and angry intelligence is rescued here, and with it the memory of the political struggles of the 1970s and 80s in which a critical feminism emerged from the ruins of the Black Power moment'

'It is not an exaggeration to say that this volume will occupy a vaunted place alongside the writings of C. L. R. James, Frantz Fanon, Aime Cesaire, Sylvia Wynter, Edouard Glissant, George Lamming, Kamau Brathwaite, Stuart Hall, and certainly Walter Rodney. And like her distinguished predecessors, Andaiye and her brilliant collaborator, Alissa Trotz, did not put this book together in order to gather dust in a library. The title says it all: The Point is to Change the World'

'A comprehensive assessment of Andaiye's journey of personal, political and professional growth. Notwithstanding her privileged position, she was a resolute advocate for working-class women. Her legacy as a Caribbean activist and strategist is formidable'

FOREWORDS
Andaiye’s Radical Imagination—with Special Reference to Hern Engagement with the Working People’s Alliance - Clem Seecharan
Between Home and Street: Andaiye’s Revolutionary Vision - Robin D. G. Kelley
The Principle of Justice as a Labor of Caring - Honor Ford-Smith
Editor’s Note: On the Politics of Precision
Preface and Acknowledgements
Abbreviations
PART ONE - LEARNING LESSONS FROM PAST ORGANIZING
Section I - The Good and Bad of Some Earlier Feminist and Left Organizing in the Region
1. The Angle You Look from Determines What You See: Towards a Critique of Feminist Politics and Organizing in the Caribbean [2002]
2. The Historic Centrality of Mr. Slime: George Lamming’s Pursuit of Class Betrayal in Novels and Speeches [2003]
3. The Grenada Revolution, the Caribbean Left, and the Regional Women’s Movement: Preliminary Notes on One Journey [2010]
4. Conversations about Organizing: Revised Excerpts from an Interview with Andaiye by David Scott [2004]
Section II - Notes on the Guyana Indian/African Race Divide, and on Organizing within and against it
5. 1964: The Rupture of Neighborliness and its Legacy for Indian/African Relations [2008; 2018] (with D. Alissa Trotz)
6. Organizing within and against Race Divides: Lessons from Guyana’s African Society for Cultural Relations with Independent Africa, Indian Political Revolutionary Associates, and the Early Working People’s Alliance [2008, 2017/2018]
7. Three Letters against Race Violence [2004, 2008]
PART TWO - A DIFFERENT PERSPECTIVE: STARTING WITH THE UNWAGED CARING WORK OF MAINLY WOMEN WE REACH ALL SECTORS
Section I - Why and How to Count Unwaged Work
8. Valuing Unwaged Work: A Preparatory Brief for CARICOM Ministers Responsible for Women’s Affairs Attending the 4th World Conference on Women [1994]
9. Grassroots Women Learning to Count their Unwaged Work: Summary Report on a 2001–2002 Trial [2009]
10. Looking at the Legalization of Abortion from the Perspective of Women as Unwaged Carers [1993]
Section II - Breaking the Frontier between Home and Street, Unwaged and Waged
11. Strike for a Millennium which Values all Women’s Work and all Women’s Lives: A Call to Action [2000]
12. The Impact of the IMF Structural Adjustment Programme on Women’s Unwaged Work and How We Can Resist It [c.mid-1980s]
13. Housewives and Other Carers in the Guyanese Resistance of the Late 1970s and Early 1980s: Looking Back [2010] 134
14. Four Letters in Defense of Workers, Unwaged and Waged, and their Families [2011, 2012, 2018]
PART THREE - THE POLITICAL IN THE PERSONAL
Section I - My Breast and Yours, and the Inequalities of Power
15. The War on Cancer as Seen by an Embattled Survivor [2017/2018]
16. Sister Survivor: For Audre Lorde [1992]
Section II - Women and Depression: Auto/biographies
17. Asylum: Diary of the Last Seven Days in a Women’s Psychiatric Ward [c.1973]
18. M: A Daughter’s Tale [c.1982]
Section III - Undomesticating Violence
19. Against the Beating of Children: Submission to a Parliamentary Sub-committee on the Corporal Punishment of Children [2013]
20. Three Letters against Sexual Violence against Children [2010]
21. Knife Edge: Living with Domestic and Economic Violence [2013]
22. Women as Collateral Damage in Race Violence [2002]
23. Sexual Violence is a Question of Whose Honor? [2000]
24. Sexual Abuse and the Uses of Power [2018]
25. Letter to the Police Complaints Authority on an Allegation of Rape against a Police Commissioner [2012]
PART FOUR - TOWARDS STRENGTHENING THE MOVEMENT
26. Gender, Race, and Class: A Perspective on the Contemporary Caribbean Struggle [2009]
Last Word
27. Walter Rodney’s Last Writing on and for the Guyanese Working People [2010]
Afterword: Andaiye and the Caribbean Radical Organizing Tradition - Anthony Bogues
Index

The Black experience of cancer is rarely discussed. For Breast Cancer Awareness Month, and Black History Month (UK), we extract this touching essay by Andaiye remembering her ‘sister survivor’.

END_OF_DOCUMENT_TOKEN_TO_BE_REPLACED
Back to Top
X