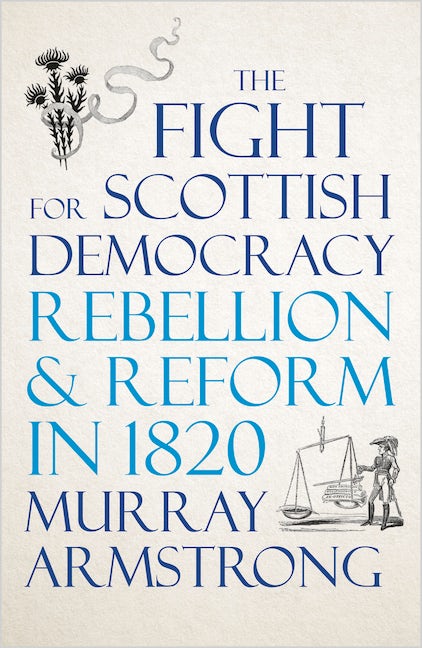 The Fight for Scottish Democracy

Rebellion and Reform in 1820

Three Scottish weavers, James Wilson, Andrew Hardie and John Baird, were hanged and beheaded for high treason in the summer of 1820. Nineteen more men were transported to the penal colony of Botany Bay. Their crime? To have taken up arms against a corrupt and nepotistic parliament, and the aristocratic government that refused to reform it.

This 'Radical War' was the culmination of five years of unsuccessful mass petitioning of Westminster by working people in Scotland and England. The contempt and intransigence of the Tory government forced an escalation in tactics, and on Easter Monday of 1820, the call for a general strike was answered throughout the western counties of Scotland. Their demands were threefold: the vote for all men, annual parliaments and equal constituencies. Coupled with an armed rebellion, the strike was met by the full military might of the British state; hundreds were arrested and imprisoned without trial, while hundreds more fled the country.

This Scottish general strike and insurrection is a little-known chapter of British history and yet remains an immensely important one in the long fight for democracy. In The Fight for Scottish Democracy, Murray Armstrong brings these events dramatically to life.

Murray Armstrong is former associate editor at the Guardian, where he worked for over twenty years. He is the author of The Liberty Tree: The Stirring Story of Thomas Muir and Scotland's First Fight for Democracy (2014).

'This quite excellent book, with its extremely comprehensive research, revelatory conception and lucid prose, has the welcome potency to finally dispel the long concocted myth that, compared to 18th century England, Scotland was inherently averse to radical creative or physical unrest'

'Intensely dramatic, impeccably detailed and narrated with literary flair, Armstrong brings to life the history of a powerful yet forgotten revolution'

'In his book on Thomas Muir, Armstrong vividly told the story of one of Scotland's greatest sons and the radical cause. Now he does the same for those involved in the 1820 rising. It's sadly a tale that's largely been untold. But this eloquently rights that wrong'

'Armstrong pulls off a masterful feat, colouring a world long gone with such vivid detail that you feel the hope, injustice and ruthless suppression of a great but unsung democratic uprising. Yet, even though the period is so powerfully re-imagined, there's no loss of historical accuracy or political drive in this excellent book'

- Lesley Riddoch, author of 'Blossom: What Scotland Needs to Flourish'

'At a time when anachronistic discussions of Scottish nationalism are prevalent, Armstrong's book should prove to be an outstanding and timely contribution to literature on Scottish history on the 200th anniversary of the Radical War'

- Neil Davidson, author of 'The Origins of Scottish Nationhood'

The Myths of Scotland’s Radical War

Murray Armstrong discusses how the Radical War of 1820 reverberated throughout Scotland’s history, and how the roots of today’s radical nationalism need to be reappraised.

END_OF_DOCUMENT_TOKEN_TO_BE_REPLACED
Back to Top
X