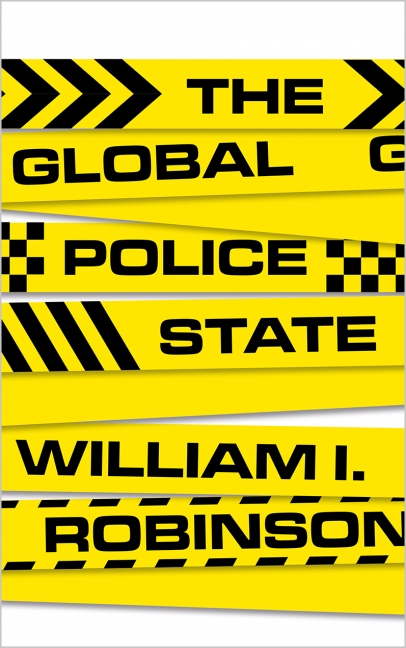 by William I Robinson

A critical look at the terrifying ways the police are used to control 'surplus' populations worldwide.

As the world becomes ever more unequal, people become ever more 'disposable'. Today, governments systematically exclude sections of their populations from society through heavy-handed policing. But it doesn't always go to plan. William I. Robinson exposes the nature and dynamics of this out-of-control system, arguing for the urgency of creating a movement capable of overthrowing it.

The global police state uses a variety of ingenious methods of control, including mass incarceration, police violence, US-led wars, the persecution of immigrants and refugees, and the repression of environmental activists. Movements have emerged to combat the increasing militarization, surveillance and social cleansing; however many of them appeal to a moral sense of social justice rather than addressing its root - global capitalism.

'Every socialist should read this book'

'A field guide to repression in the 21st century, with its state control and new forms of surveillance and technological manipulation.'

'Robinson gives powerful theoretical coherence to everyone's fear that the fascism is being reborn, but adds the important twist that repression itself has grown into an essential engine of accumulation'

- Mike Davis, author of 'Planet of Slums' and co-author of 'Set the Night on Fire: Los Angeles in the Sixties'

'For the last twenty years, William Robinson has been one of the most important analysts of global capitalism and the dynamics of globalization. In this new work, Robinson turns his attention to the emergence of a 21st century "global police state" that has developed as a corollary to growing inequality, climate collapse, and intensifying migration movements of the dispossessed. As Robinson warns, with great deprivation comes great repression, policing and potentially war. Robinson writes pointedly and with urgency for a broad audience with an interest in mobilizing for a just world'

- Keeanga-Yamahtta Taylor, Professor of African American Studies at Princeton University and author of 'From #BlackLives Matter to Black Liberation'

'Karl Marx aspired to a world in which our animal needs would be satisfied and our human needs could be addressed. It is a realistic possibility now, as William Robinson outlines – or the alternative that is taking shape before our eyes: a 'global police state' controlled by narrowly concentrated capital with 'surplus humanity' left to survive somehow on its own. The choice is in our hands. There could hardly be a more compelling one'

- Noam Chomsky, Institute Professor Emeritus at the Massachusetts Institute of Technology (MIT) and author of 'Who Rules the World?'

‘A crucial reflection on power, capitalism and war globally … The Global Police State provides an accessible and compact overview of repression and corporate expansion into policing and surveillance.’

A Brief Acknowledgment of Collective Authorship
List of Acronyms
Introduction: “George Orwell Got It Wrong”
1. Global Capitalism and its Crisis
2. Savage Inequalities: The Imperative of Social Control
3. Militarized Accumulation and Accumulation by Repression
4. The Battle for the Future
Notes
Index

The Global Police State:
Militarization, Repression and Capitalism in the US

The Black Lives Matter protests represent the the first full-scale pushback against the global police state in the richest and most powerful country in the world.

END_OF_DOCUMENT_TOKEN_TO_BE_REPLACED
Back to Top
X