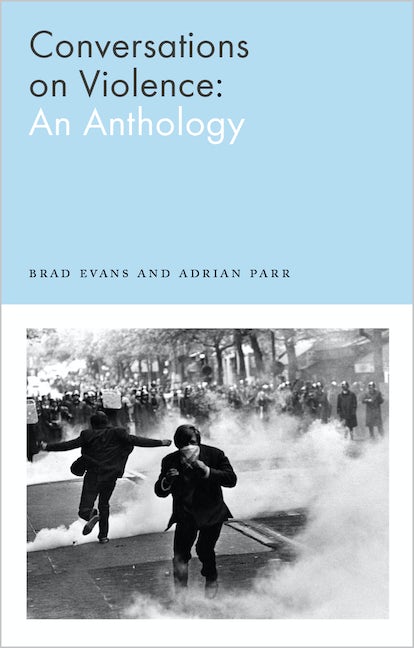 by Brad Evans and Adrian Parr

Leading thinkers discuss the experience and repercussions of violence, exploring its varied manifestations in the world today

'Brad Evans in one of the brightest critical minds of his generation' - Henry A. Giroux

Whether physical or metaphorical, institutional or interpersonal, violence is everywhere. A seemingly immutable fact of life, it is nonetheless rarely engaged with at the conceptual level. What does violence actually mean? And is it an inevitable part of the human condition?

Conversations on Violence brings together many of the world's leading critical scholars, artists, writers and cultural producers to provide a kaleidoscopic exploration of the concept of violence. Through in-depth interviews with thirty figures including Marina Abramovic, Russell Brand and Simon Critchley, Brad Evans and Adrian Parr interrogate violence in all its manifestations, including its role in politics, art, gender discrimination and decolonisation.

Provocative, eye-opening and bracingly original, Conversations on Violence sheds light on a defining political and ethical concern of our age.

Brad Evans is a political philosopher, critical theorist, and writer specialising in the problem of violence. He is Professor of Political Violence & Aesthetics at the University of Bath and the lead editor for the Histories of Violence section with the Los Angeles Review of Books.

Adrian Parr is an internationally recognised environmental, political and cultural thinker and activist. She is Dean of the College of Design at the University of Oregon, and she serves as a UNESCO Chair on Water and Human Settlements.

'Violence has been extraordinarily difficult to account for in conception and explanation. This compelling collection of first-rate contributions goes a long way to addressing these difficulties ... it serves as an anchor for critical thinking on the complex range, power and impacts of violence'

'Conversations on Violence may have a foreboding title, but the collected interviews with artists, academics, activists, and entertainers is lively, stimulating, and engaging it is more like a salon than a crime scene. The topics discussed are serious and urgent from climate change, to the re-emergence of fascism, to sexual assault but the brilliant minds included here address these issues in direct and clear-eyed ways that point to fairer, safer, and more fully realized modes of existence in the future'

'Notable contemporary thinkers and creators give their individual perspectives in this compelling look at violence. ... A provocative volume that challenges humanity to correct its runaway course toward an increasingly violent future by learning from its violent past'
Kirkus Reviews

'The purpose of the work is to challenge humanity to create more meaningful solutions when it comes to these kinds of violence--or at least to name violence without inadvertently inciting even more anger. . . . passion roars through every chapter . . . This book delivers on what it promises, which is an achievement'
The Los Angeles Review of Books

'Many of us live today with a pervasive sense of unease, worried that our own safety is at risk, or that of our loved ones, or that of people whose bad circumstances appear to us through networked media. Violence feels ever-present. Natasha Lennard and Brad Evans help us to analyze those feelings, talking with a wide range of thinkers in order to gain insight into the worst of what humans do, and challenging us to imagine a world in which violence is no longer a given. Their book is full of surprising insights and intelligent compassion'
Sarah Leonard, co-editor of The Future We Want: Radical Ideas for the New Century

'In Violence, Brad Evans and Natasha Lennard have created, alongside their interview subjects, a kaleidoscopic exploration of the concept of violence, in terrains expected and not, in prose taut and unexpectedly gorgeous. Their philosophical rigor provides the reader with an intellectual arsenal against the violence of the current moment'
Molly Crabapple, author of Drawing Blood

'This is a book that will make everyone feel clever. Reflections on violence, both actual, and the possibility of, mediating so much of social interaction, also makes for critical reading. The range of interviews with leading academics, to filmmakers and artists, is impressive, at once immediate and relevant, but also profoundly philosophical. More essentially, though, the conversations underline the need and suggest ways to resist and organize in a visionary way, in the extraordinary times we live in'
Razia Iqbal, BBC News

'Standing on their own, the interview subjects featured in Violence: Humans In Dark Times might be identified as the foremost intellectuals, artists, and activists engaged with questions of how violence moves, acts, and is witnessed in the world. But summoned together in this collection by two political thinkers distinguished by both their unmatched intellects and their willingness to deploy those intellects in acts of service rather than performance, their voices materialize as a creative space large and fertile enough to lay the groundwork for an actionable hope. The result is a groundbreaking testament to the vital role of the abstract and the theoretical for understanding the depth to which violence is entrenched in human experience and consciousness and to the necessity of empathetic intellectual stewards like Lennard and Evans to direct such understanding into transformative action. We would be wise to read this collection with a similar eye toward service, and in so doing, open ourselves up to the rare mercy of no longer having to stand on our own'
Alana Massey, author of All The Lives I Want