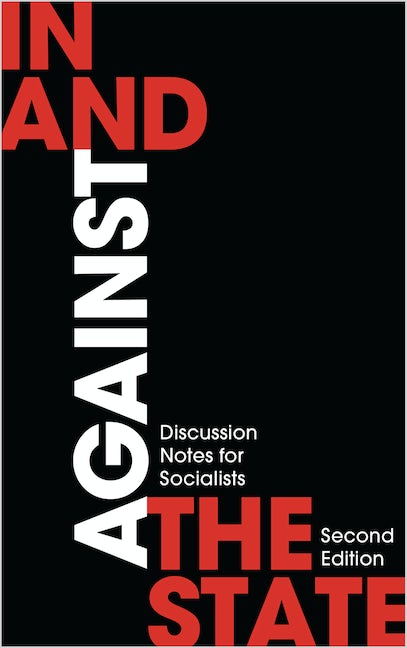 In and Against the State

Forty years after its first publication, In and Against the State returns with a new introduction and featuring an interview with John McDonnell

Originally published as a pamphlet in 1979 and again by Pluto in 1980, In and Against the State brought together questions of working-class struggle and state power, exploring how revolutionary socialists might reconcile working in the public sector with their radical politics. Informed by autonomist political ideas and practices that were central to the protests of 1968, the book’s authors spoke to a generation of activists wrestling with the question of where to place their energies.

Forty years have passed, yet the questions it posed are still to be answered. As the eclipse of Corbynism and the onslaught of the global pandemic have demonstrated with brutal clarity, a renewed socialist strategy is needed more urgently than ever.

This edition includes a new introduction by Seth Wheeler and an interview with John McDonnell that reflect on the continuing relevance of In and Against the State and the questions it raises.

The London Edinburgh Weekend Return Group was a working group of the Conference of Socialist Economists.

Seth Wheeler has over 20 years of experience within the domestic and international extra-parliamentary left(s). He is the co-editor of Occupy Everything (Minor Compostions, 2013), co-founder of the communist organisation Plan C, and a founding editor of the online workerist journal Notes From Below. He has contributed to Novara Media among other publications and is completing his PhD at Royal Holloway, University of London.

'The questions discussed in this gem of workers' inquiry and activist reflection are as relevant in the aftermath of the Covid-19 crisis, when massive stimulus packages signal a departure from monetarism, as they were in 1979, when Thatcher's public spending cuts started to ravage an already problematic welfare state. Only by struggling against the state's reproduction of inequality and struggling for a democratisation of its functions we can start imagining a just and sustainable alternative'

'How can we fight both inside and outside the state for the socialist futures we so urgently need? There never was a better time to revisit the 'in and against the state' formulations of the radical left. Essential reading for everyone eager for change in these dangerous times'

'This new edition of a seminal 1980 text is a revelation. The interview with ex-Shadow Chancellor John McDonnell and a new, contextualising introduction reveals a decades spanning red thread which will prove vital for the left's continued renewal'

'Superbly timely. 'In and Against' is such a creative strategic concept, avoiding dogmatic binaries'

Introduction - Seth Wheeler (University of Royal Holloway)
Preface to Second Edition
Preface to First Edition
1. In the State
2. The Predicament
3. Understanding the Capitalist State
4. Crisis
5. Against the State
6. Oppositional Possibilities
Original Postscript
1 Living the Crisis
2 The New Mode of Domination
3 Anger, Resistance and the Making of Socialism
4 Interview with John McDonnell