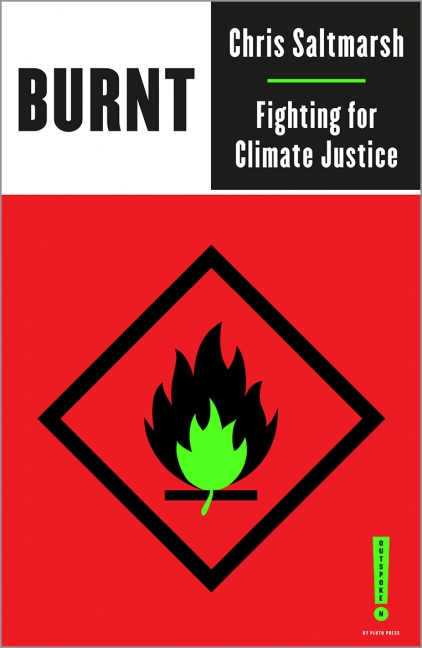 The climate crisis keeps getting worse. We need to rethink how we fight the most important battle of our lives

'An inspiring rallying cry for activists everywhere to work together to build a just, ecosocialist future' - Grace Blakeley

Time is up. The climate crisis is no longer a future to be feared, but a devastating reality. We see it in the wildfires in California and floods across Britain - the 'once in a generation' extreme weather events that now happen every year.

In a world where those in charge are constantly letting us down, real change in our lifetime means taking power into our own hands. The task ahead of us is daunting, but the emergence of a new wave of movements focused on climate justice, equality and solidarity also brings hope.

Asking how we have arrived at this moment, Chris Saltmarsh argues that the profoundly political nature of the environmental crisis has been relentlessly downplayed. After all, how can solar panels save us while capitalism places profit over the future of the planet? Analysing the failures of NGOs, the limitations of Extinction Rebellion and Youth Strikes, the role of trade unions, and the possibilities of a Green New Deal, Burnt issues a powerful call for a radical collective movement: saving the world is not enough; we must build a better one in the process.

Chris Saltmarsh is co-founder of Labour for a Green New Deal. He has written for a wide range of media including Novara Media, Tribune, Jacobin, the Ecologist, openDemocracy, Vice and New Internationalist.

'A brilliantly readable and absorbing analysis of the capitalist roots of climate breakdown, and an inspiring rallying cry for activists everywhere to work together to build a just, ecosocialist future'

'Burnt takes us to the structural roots of climate injustice in colonialism, class, gender and race. But it goes beyond analysis. It is an activist guide on 'being the change you want to see' in times of climate catastrophe. Saltmarsh shows that the antidote to climate injustice is not depression or hopelessness but hope born from a struggle for justice'

'Few people still deny that climate change is taking place, but who is to blame for the crisis? Chris Saltmarsh sets the record straight, explaining that the capitalist system that is to blame, and the fight for climate justice offers a way out. This rousing book demonstrates that by joining in solidarity with others fighting for a new society, we can remake the world for everyone rather than just the wealthy few'

- Ashley Dawson, Professor of Postcolonial Studies in the English Department at the Graduate Center / City University of New York and the College of Staten Island, and author of 'People's Power: Reclaiming the Energy Commons' (O/R, 2020)

'A great contribution to unveiling the roots of our crisis, rich in storytelling drawing from Chris' deep experience in organising for a world that centres people and planet'

'From 'generation climate' to a transformative Green New Deal, this is a sure guide through the politics of environmental breakdown and why radical ambition is our safest path forward'

- Mathew Lawrence, co-author of 'Planet on Fire: A Manifesto for the Age of Environmental Breakdown' (Verso, 2021) and Director of the think tank Common Wealth

'Pushes the British climate movement to go further in their demands for ecological justice. Unlike many books about climate breakdown, this book understands the political and economic system that is holding us to ransom, and has a good idea of how to change it'

- Sam Knights, activist and editor of 'This Is Not A Drill: An Extinction Rebellion Handbook' (Penguin, 2019)

END_OF_DOCUMENT_TOKEN_TO_BE_REPLACED
Back to Top
X