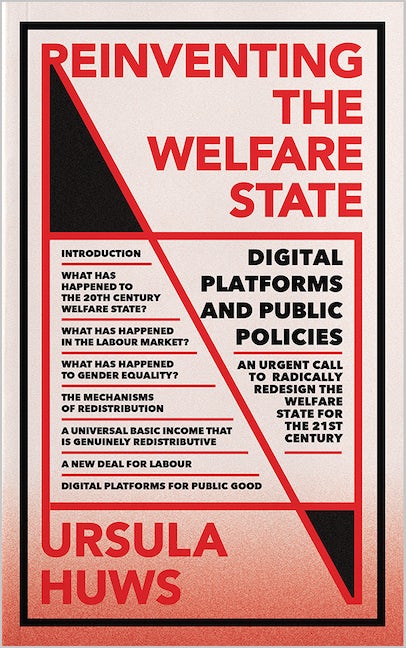 The welfare state is unfit for purpose – how can we transform it into a force for equality and social justice?

The Covid-19 pandemic has tragically exposed how today’s welfare state cannot properly protect its citizens. Despite the valiant efforts of public sector workers, from under-resourced hospitals to a shortage of housing and affordable social care, the pandemic has shown how decades of neglect has caused hundreds to die. In this bold new book, leading policy analyst Ursula Huws shows how we can create a welfare state that is fair, affordable, and offers security for all.

Huws focuses on some of the key issues of our time – the gig economy, universal, free healthcare, and social care, to criticize the current state of welfare provision. Drawing on a lifetime of research on these topics, she clearly explains why we need to radically rethink how it could change. With positivity and rigor, she proposes new and original policy ideas, including critical discussions of Universal Basic Income and new legislation for universal workers' rights.

She also outlines a 'digital welfare state' for the 21st century. This would involve a repurposing of online platform technologies under public control to modernize and expand public services, and improve accessibility.

Ursula Huws is Professor of Labour and Globalisation at the University of Hertfordshire. Her most recent book is Labour in Contemporary Capitalism: What Next? (2019). She has been carrying out pioneering research on the economic and social impacts of technological change, the restructuring of employment and the changing international division of labour, for many years.  She lectures, advises policy-makers, and has written numerous books.

'Huws documents brilliantly how the welfare state has morphed into a machine for increasing inequality and distributing wealth upwards. Her solutions are radical, but in the post-Covid slump radicalism will be essential.'

- Paul Mason, author of 'Postcapitalism: A Guide to Our Future'

‘A must-read for those who seek to find a logical order behind the dramatic events of current times. Ursula Huws’ work maps out with great attention the new borders of the socio-economic issues of today’

'A searing critique of how welfare cuts have hit the most vulnerable hardest - and a compelling account of how we can rebuild social security with new tech. A must read for policymakers, campaigners and trade unionists.'

'With remarkable precision, Ursula Huws provides a chilling account of how the British welfare state has been turned upside down, no longer a mechanism for reversing inequality but for enhancing the wealth of the super-rich. She then outlines a new welfare agenda, detailing the infrastructures necessary to enhance the lives of carers and cared for alike, as well as now essential for global sustainability overall. Not to be missed!'

- Lynne Segal (from the Care Collective)

'Ursula Huws hits the nail on its head exposing the brutal exploitation of vulnerable workers as the gig economies flourish.'

It is clear that our welfare state is no longer fit for purpose. But how can it be fixed?

END_OF_DOCUMENT_TOKEN_TO_BE_REPLACED
Back to Top
X