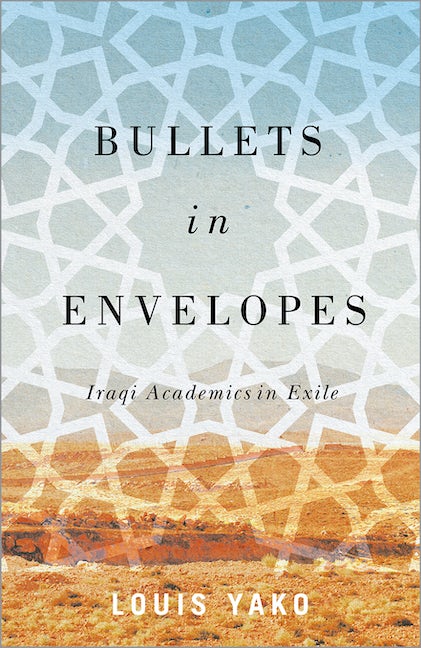 The social and intellectual history of Iraq told through the academic, political and social experiences of Iraqi academics in exile

Following the US invasion of Iraq in 2003, many Iraqi academics were assassinated. Countless others received bullets in envelopes and instructions to leave their institutions (and in many cases the country) or get killed. Many heeded the warning and fled into exile.

Having played such a pivotal role in shaping post-independence Iraqi society, the exile and internal displacement of its academics has had a profound impact. Tracing the academic, political and social lives of 63 academics, Bullets in Envelopes offers a 'genealogy of loss', and a groundbreaking appraisal of the dismantling and restructuring of Iraqi institutions, culture and society.

Through extensive fieldwork in the UK, Jordan and Iraqi Kurdistan, Louis Yako shows the human side of the destructive 2003 occupation, and asks us to imagine a better future.

Louis Yako is an independent Iraqi-American anthropologist, writer, poet and journalist. He has written for a range of publications including CounterPunch, openDemocracy, Global Research and The Feminist Wire.

'These life stories of academics from around the globe tell a vivid, inspiring and sometimes poetic history of modern Iraq'

'Searing! The American assault aimed to 'end' the Iraqi state and shatter the culture that sustained it. Yako retrieves the stories of some sixty displaced Iraqi academics. Distillations of their experiences read as if written on shards of glass that penetrate the skin and wound the heart'

'Luis Yako's thinking is as compelling as his writing. 'Bullets in Envelopes' persuasively shifts the politics of argumentation. He uses anthropology to convey the existential turbulence of academics in exile after the US invasion, instead of using academics to advance the discipline'

'Excavates a searing genealogy of loss that documents Iraqi academics' displacement, through a powerful account of the travails of higher education and the links between power and knowledge'

Preface
Starting from the End: Returning to Iraq after a Decade in Exile
Acknowledgments
Introduction: The Story of This Story
Questions and Contributions
Fieldwork and Research
Chapter-by-Chapter Summary
PART I
1. A Nuanced Understanding of Iraq during the Baʿath Era
The Conveniently Omitted Nuances of Iraq’s Story in Western
Discourse
A More Refined Understanding of the Iraqi Baʿath Era
2. The Baʿath Era: Iraqi Academics Looking Back
Communist Academics and the Baʿath
Curriculum, Fellowships, and Freedom of Expression
Women Academics under the Baʿath
Religion and Sectarianism under the Baʿath
3. The UN Sanctions: Consenting to Occupation through Starvation
Documented Facts and Consequences of the UN Sanctions
Blockaded on Every Side
Women Academics during the Sanctions
Academic Voices Critiquing the Iraqi Regime
PART II
4. The Occupation: Paving the Road to Exile and Displacement
Restructuring State and Society through Cultural and Academic Cleansing
Killings, Assassinations, and Threats as Cleansing
Sectarian Violence as Cleansing
“De-Baʿathification” as Cleansing
5. Lives under Contract: The Transition to the Corporate University
Exile Starts at Home
Lives under Contract: The Corporate University in Jordan
Lives under Contract: The Corporate University in Iraqi
Kurdistan
The Campus as “Concentration Camp”
6. Language as a Metonym for Politics
The Politics of Language on Campus
The Social Implications
Do Sad Stories Ever End?
7. Final Reflections: Home, Exile, and the Future
Notes
Bibliography
Index