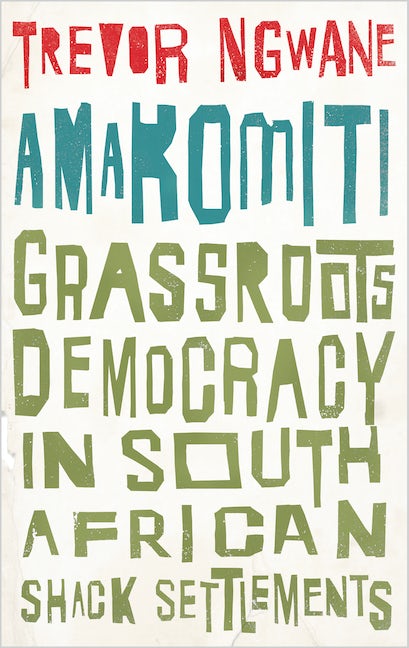 'One of the most exciting and provocative books that I've read in a long time' - Mike Davis, author of Planet of the Slums

Can people who live in shantytowns, shacks and favelas teach us anything about democracy? About how to govern society in a way that is inclusive, participatory and addresses popular needs? This book argues that they can.

In a study conducted in dozens of South Africa's shack settlements, where more than 9 million people live, Trevor Ngwane finds thriving shack dwellers' committees that govern local life, are responsive to popular needs and provide a voice for the community. These committees, called 'amakomiti' in the Zulu language, organise the provision of basic services such as water, sanitation, public works and crime prevention especially during settlement establishment.

Amakomiti argues that, contrary to common perception, slum dwellers are in fact an essential part of the urban population, whose political agency must be recognised and respected. In a world searching for democratic alternatives that serve the many and not the few, it is to the shantytowns, rather than the seats of political power, that we should turn.

Trevor Ngwane is a scholar activist who spent twenty years as a full-time organiser in South African trade unions, community organisations and social movements before and after the defeat of apartheid. He later obtained his PhD in Sociology at the University of Johannesburg where he now teaches and conducts research.

'One of the most exciting and provocative books that I've read in a long time, 'Amakomiti' challenges the stereotype of shanty-dwellers as a powerless underclass without social power. Ngwane unveils instead a defiant working-class world with rich traditions of resistance and a genius for self-organization'

'A remarkable book - Ngwane's great achievement is he once more rescues the amakomiti from academic condescension and historical obliteration. Here, he says, is a vision of another world made, run, and governed by working people. 'Amakomiti' is a book everyone should read'

- Leo Zelig, author of 'An Ounce of Practice' (Hoperoad, 2017), and an editor of the 'Review of African Political Economy'

'A powerfully compelling account of grassroots democracy and forms of self-organisation in shack settlements [that] makes vividly clear the diversity, dynamism, and significance of these committees. Wonderfully illuminating'

'A work of great erudition and elegance, it writes shack dwellers and their committees into the history of the working class movements and democratic theory'

'Compelling ... beats powerfully with an urgency for radical social change and democracy from below, fuelled and informed by the hard, daily struggles for housing, land, dignity and justice it makes visible'

- Aziz Choudry, editor of 'The University and Social Justice Struggles Across the Globe' (Pluto, 2020)

'A rich and illuminating exploration of how working-class people organise to advance their interests that, thanks to Ngwane's flair for storytelling, is a pleasure to read'

List of Figures and Tables
List of Photos
List of Abbreviations and Acronyms
Series Preface
Preface
1. Introduction: Disrupting Private Land Ownership?
2. ‘The People Cannot Live in the Air’: History of the Squatter Movement in South Africa
3. Amakomiti are Everywhere
4. Fatal Embrace by the ANC in Duncan Village
5. Iinkundla of Nkaneng: The Rural in the Urban Dialectic
6. Thembelihle Settlement: A Vision of Hope
7. Amakomiti: A Vision of Alternatives
Postscript: Covid-19 and the Shacks
Appendix 1: List of Case Study Interviews
Appendix 2: List of Research Tour Interviews and Places Visited
Notes
Index