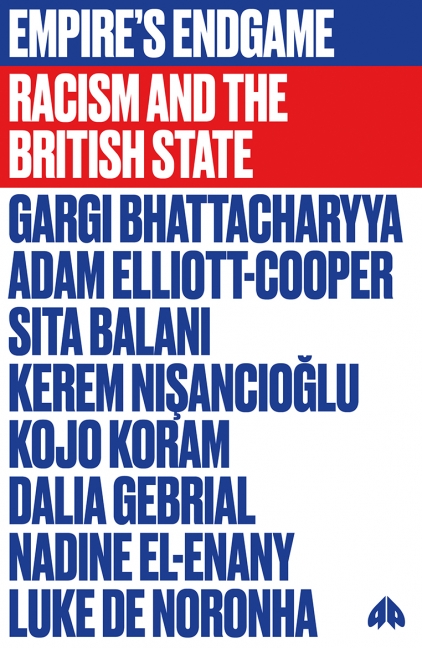 Racism and the British State

An insightful analysis examining race, the state, the media and criminalisation in Britain

We are in a moment of profound overlapping crises. The landscape of politics and entitlement is being rapidly remade. As movements against colonial legacies and state violence coincide with the rise of authoritarian regimes, it is the lens of racism, and the politics of race, that offers the sharpest focus.

In Empire's Endgame, eight leading scholars make a powerful intervention in debates around racial capitalism and political crisis in Britain. While the 'hostile environment' policy and Brexit referendum have thrown the centrality of race into sharp relief, discussions of racism have too often focused on individual behaviours. Foregrounding instead the wider political and economic context, the authors trace the ways in which the legacies of empire have been reshaped by global capitalism, the digital environment and the instability of the nation-state.

Engaging with movements such as Black Lives Matter and Rhodes Must Fall, Empire's Endgame offers both an original perspective on race, media, the state and criminalisation, and a political vision that includes rather than expels in the face of crisis.

Gargi Bhattacharyya is Professor of Sociology at University of East London. She is the author of Rethinking Racial Capitalism (Rowman & Littlefield, 2018), Dangerous Brown Men (Zed, 2008) and Traffick (Pluto, 2005).

Adam Elliott-Cooper is a Researcher in Social Sciences at Greenwich University. He is the author Black Resistance to British Policing (MUP).

Sita Balani is a lecturer in contemporary literature and culture at King's College London. She is the author of Deadly and Slick: How Sex makes Race in Postcolonial Britain (Verso, 2021).

Kerem Nişancıoğlu is a Lecturer in International Relations at SOAS, University of London. He is the co-author of How the West Came to Rule (Pluto, 2015), and co-editor of Decolonising the University (Pluto, 2018). He also blogs at The Disorder of Things.

Kojo Koram is a lecturer at the School of Law at Birkbeck College, University of London. He is the editor of The War on Drugs and the Global Color Line (Pluto, 2019).

'Rigorous, impassioned and urgent, this book punctures the puffed-up nationalist swagger of our government with an incisive critique of post-imperial decline'

'A metaphorical molotov from beyond the barricades'

'Challenges us to step outside of the tempo of the hot-take and the electoral cycle to look beyond party-political rows. As training, allyship and inclusion increasingly become the favoured response to Black Lives Matter, the book invites us to build the relationships and structures of care so necessary for a collective freedom'

'A new and much-needed analysis of the confluence of race, government, and the media during these turbulent times'

Having a revolutionary consciousness in 2020 is to live with heartbreak. This moving piece, written in a moment of despair, will speak to anyone who feels broken by the struggle.

The Sewell Report:
A Politics of Buffoonery

The racism-denying Sewell Report is part of an international, chaotic reaction of fragile white supremacists and imperial nostalgists. It is the politics of buffoons.

END_OF_DOCUMENT_TOKEN_TO_BE_REPLACED
Back to Top
X