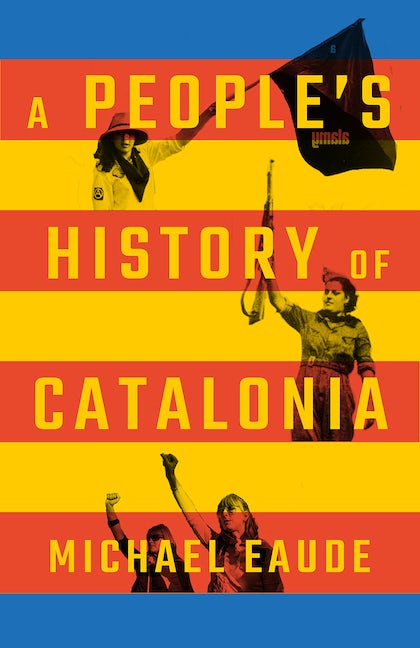 A history of Catalonia and its centuries-long struggles for survival and, now, independence

On October 1, 2017, the Spanish police assault on Catalans voting in a peaceful referendum shot Catalonia's struggle for independence onto the world's front pages. Today, those two million-plus voters have neither forgiven nor forgotten: the struggle continues.

Catalonia's national consciousness has deep roots. A People's History of Catalonia tells this small country's history, from below, in all its richness and complexity. Catalonia's struggles for freedom have, for centuries, been violently resisted; and its language and rights, suppressed. Since the nineteenth century, the fight for national sovereignty has often intertwined with working-class mobilisation for social justice. Barcelona became known as the Rose of Fire. In 1936 Catalonia saw one of history's most profound workers' revolutions.

From the peasant revolts of the 15th century and the siege of Barcelona in 1714, through the explosive workers' movement led by anarchists, the defeat in the Spanish Civil War, to the anti-Franco resistance in the grim years that followed, the author tells a compelling story whose ending has yet to be written.

Michael Eaude has lived between Barcelona and the hills of Valencia for thirty years. He has written widely on Spanish and Catalan literature and politics. His several books include Catalonia, a Cultural History and Sails and Winds on the history, politics and culture of Valencia.

'Catalonia’s aspiration to cut loose from the Spanish state is often dismissed as the whim of a self-interested merchant class. The truth is more complicated. As Michael Eaude’s sharp, engrossing, and comprehensive historical narrative makes clear, the centuries-long push for Catalan independence is closely entwined with the peasant- and working-class struggle for social justice and democratic government'

'This well-written study takes us on a much-needed historical journey from below, eloquently capturing the rebellious traditions of Catalonia's assertive and proudly defiant popular classes from medieval times to today. By combining broad strokes and intricate detail, he establishes crucial connections between past and contemporary struggles to produce a vivid picture of the class war in a fractured and divided society that produced, in many respects, the most far-reaching social revolution in European history'

- Chris Ealham, author of 'Anarchism And The City’

'This timely and impressive book not only dispels the myths and prejudices about the Catalan people's struggles, so prevalent in Spain and elsewhere, but demonstrates the constant intertwining of the battles for national rights with peasant and working-class revolt "from below". A thoroughly recommended read'

'Gives a voice to one of the most rebellious people in Europe whose insurgency reached a pinnacle in 1936 with working class revolution in Catalonia and continued through the ending of the Franco dictatorship through to today's fight to gain independence in the face of Spanish repression and nationalism. Michael does the Catalan people proud'

- Chris Bambery, author of 'Catalonia Reborn' and Public Point of Enquiry for the All Party Parliamentary Group on Catalonia

Introduction
Part I: From Empire to Province
1. Rise and Fall of the Crown of Aragon
2. The Three Great Class Struggles of the Fifteenth Century
3. Revolution and Republic: 1641
4. Damn Them When You’ve Done: 1714
5. The Inanimate Corpse
Part II: The Working Class Moves Centre-Stage
6. Rose of Fire
7. Free Men and Women
8. The Mass Strike: Europe Burning
9. The Giant Awakes
10. Cradle of the Spanish Revolution: 1936
11. Defeat of the Dictatorship
12. The Difficult Spirit: From Autonomy to Independence
Endwords
Timeline
Glossary
Bibliography
Notes
Index