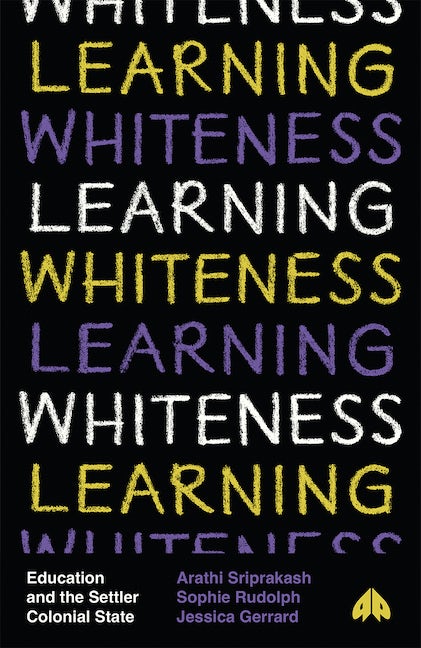 Education and the Settler Colonial State

As racism persists across the world, we need to understand the role of education in sustaining white supremacy

Whiteness is not innate – it is learned. The systems of white domination that prevail across the world are not pregiven or natural. Rather, they are forged and sustained in social and political life.

Learning Whiteness examines the material conditions, knowledge politics and complex feelings that create and relay systems of racial domination. Focusing on Australia, the authors demonstrate how whiteness is fundamentally an educational project – taught within education institutions and through public discourse – in active service of the settler colonial state.

To see whiteness as learned is to recognise that it can be confronted. This book invites readers to reckon with past and present politics of education in order to imagine a future thoroughly divested from racism.

Arathi Sriprakash is a Professor of Education at the University of Bristol. She is a founding member of the Race, Empire and Education Research Collective.

Sophie Rudolph is a Senior Lecturer in the Melbourne Graduate School of Education at the University of Melbourne. She is the author of Unsettling the Gap: Race, Politics and Indigenous Education.

Jessica Gerrard is an Associate Professor at the Melbourne Graduate School of Education, University of Melbourne. She is the author of Radical Childhoods and Precarious Enterprise on the Margins.

'A defiant corrective to the attempts to deny the existence of systemic racism. Refusing the lure of easy 'solutions', this book argues that education has an ongoing responsibility to open up spaces for grappling with racial injustice and imagining futures freed from racial domination'

‘A much-needed analysis of education for teachers, policy makers and activists interested in racial justice, serving as an important reminder that all schools within the colony operate on the sovereign land of Indigenous People. Readers are challenged to confront the colonial foundations of schooling’

'Fresh and bold [...] Decisively structural in their analysis, resolutely critical in their orientation, and radical in their hopes, the authors stoke our anti-racist imagination about the possibilities of a world after whiteness'

- Zeus Leonardo, Professor of Education at the University of California, Berkeley and author of ‘Race, Whiteness and Education’

'Theoretically astute, […] providing the reader with the coordinates to make sense of the ongoing creation of whiteness, its reactions to perceived threat, and how education is a crucial extension of the state in settler colonial structures. Through rich examples, we are offered both a comprehensive and accessible guide to confronting the desires of whiteness'

- Leigh Patel, Professor at the University of Pittsburgh and author of 'No Study Without Struggle'

'Highly impressive. The question of how racism associated with white privilege is learned is of vital importance. This book provides an insightful analysis of this difficult question in ways that are not only theoretically astute and accessible but also pedagogically helpful'

'Opens important and troubling questions. Highlighting Indigenous scholarship, the authors trace how the education systems created in settler-colonial history have actually sustained white privilege. To change this is no small task; it requires a deep re-thinking of institutions, ideas and practices'

- Raewyn Connell, Professor Emerita at the University of Sydney and author of 'Southern Theory'

'Provides rich conceptual resources for critically comprehending how education is shaped by colonizing societies, imagining an education that enables reparative rather than racially dominant futures'

- David Theo Goldberg, Distinguished Professor of Anthropology at University of California, Irvine and author of 'The Racial State'

'While many works argue that whiteness is constructed, very few go into the actual process of construction. This book does, taking us to the educational construction site where the white mind-body assemblage is fashioned'

- Ghassan Hage, Professor at the The University of Melbourne and author of 'White Nation'

'A compelling, incisive and authoritative analysis, exposing the oppressive contours of whiteness which is all the more essential in an era marked by the heightened surveillance and attempted eradication of racial justice pedagogies'