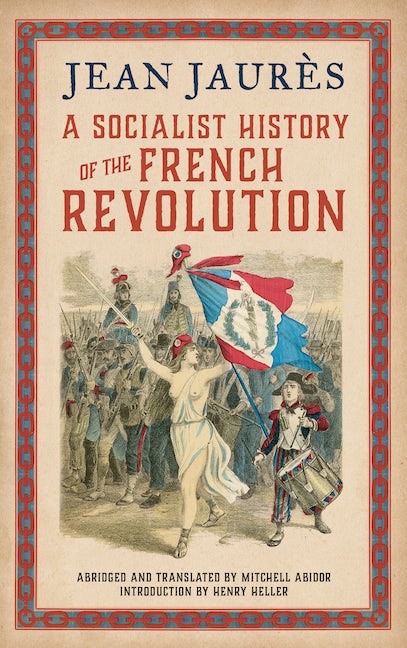 The classic history of the French Revolution by the assassinated socialist leader, Jean Jaurès

Jean Jaurès was the celebrated French Socialist Party leader, assassinated in 1914 for trying to use diplomacy and industrial action to prevent the outbreak of war. Published just a few years before his death, his magisterial A Socialist History of the French Revolution has endured for over a century as one of the most influential accounts of the French Revolution ever to be published.

Written in the midst of his activities as leader of the Socialist Party and editor of its newspaper, L'Humanité, Jaurès intended the book to serve as both a guide and an inspiration to political activity; even now it can serve to do just that.

Jaurès's verve, originality and willingness to criticise all players in this epic drama make this a truly moving addition to the shelf of great books on the French Revolution. Now available for the first time in paperback, Mitchell Abidor's abridged translation of Jaurès's original six volumes makes this exceptional work truly accessible to an Anglophone audience.

Jean Jaures (1859-1914) was the leader of the French Socialist Party, which opposed Jules Guesde's revolutionary Socialist Party of France. An antimilitarist, Jaures was assassinated at the outbreak of World War I, and remains one of the main inspirations to the French left. His defining work was A Socialist History of the French Revolution.

Henry Heller is a Professor of History at the University of Manitoba, Canada. He is the author of The Capitalist University (Pluto, 2016), The Birth of Capitalism: A 21st Century Perspective (Pluto, 2011) The Cold War and the New Imperialism: A Global History, 1945-2005 (Monthly Review Press, 2006) and The Bourgeois Revolution in France (Berghahn, 2006).

'Tantalizing prose... The lively sense of being 'inside' the Assembly or the meetings of the Paris City Council leaps from the page'

'The death of a single human being can mean a great battle lost for all humanity: the murder of Jaurès was one such disaster'

'Jaurès' brilliant analysis is as refreshing and controversial today as it was over a century ago. It resonates with the passion and eloquence of this great political leader while at the same time sustaining a rigourous Marxist analysis of the social and economic forces behind the Revolution. Its appearance in this edition is to be warmly welcomed'

'A classic of historical writing which laid the foundations for so many later accounts of the French Revolution. Jaurès vividly depicts the drama of the Revolution, the triumphs and the setbacks, the bloodshed and the hope, but always with an eye to the future, to how the Revolution opened the way to human emancipation'

- Ian Birchall, historian and author of The Spectre of Babeuf

Introduction by Henry Heller
Translator’s Note
1. Introduction
2. The Causes of the Revolution
3. July 14, 1789
4. National Lands
5. The Revolutionary 'Journées'
6. The Flight to Varennes
7. The Insurrection of August 10, 1792
8. The September Massacres
9. The Battle of Valmy
10. The Trial of the King
11. The Enragés against the High Cost of Living
12. The Revolution of May 31 and June 2, 1793
13. Marat’s Assassination
14. Dechristianization
15. The Dictatorship of Public Safety and the Fight against the Factions
16. The Terror and Fall of Robespierre
17. How Should We Judge the Revolutionaries?
Index