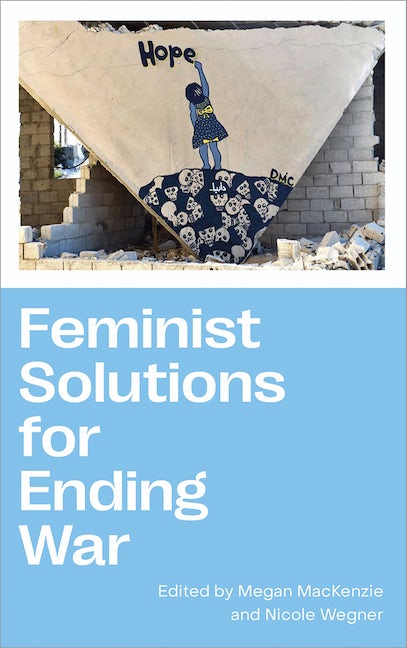 Will war ever end? Feminists across the world are proving that they can oppose patriarchal capitalist violence

'War is a man's game,' or so goes the saying. Whether this is true or not, patriarchal capitalism is certainly one of the driving forces behind war in the modern era. So can we end war with feminism? This book argues that this is possible, and is in fact already happening.

Each chapter provides a solution to war using innovative examples of how feminist and queer theory and practice inform pacifist treaties, movements and methods, from the international to the domestic spheres. The contributors propose a range of solutions that include arms abolition, centring Indigenous knowledge, economic restructuring, and transforming how we 'count' civilian deaths.

Ending war requires challenging complex structures, but the solutions found in this edition have risen to this challenge. By thinking beyond the violence of the capitalist patriarchy, this book makes the powerful case that the possibility of life without war is real.

Megan MacKenzie is the Simons Chair in International Law and Human Security in the School for International Studies at Simon Fraser University. She is the author of Beyond the Band of Brothers: The US Military and the Myth that Women Can't Fight (CUP, 2015).

Nicole Wegner is a post-doctoral research fellow at the University of Sydney. She is the author of Martialling Peace: How the Peacekeeper Myth Legitimizes Warfare (Edinburgh Press, 2022).

‘So much of patriarchal political culture is sustained by the myth that war, like poverty, will always be with us. But as I read the grounded, energizing chapters of Mackenzie's and Wegner's engaging book, I realized that the unrealistic ones among us are actually those who perpetuate the myth of unending war’

'Explains the deeply-rooted gendered realities of war and builds on intersectional feminist analyses to articulate diverse creative possibilities for peace. In our increasingly militarised world it challenges us to use our political imaginations to think differently'

'This collection shows that war is not a human inevitability, but a choice - a choice that states make over and over again. It offers intellectual and practical solidarity, and real tools for making other choices possible'