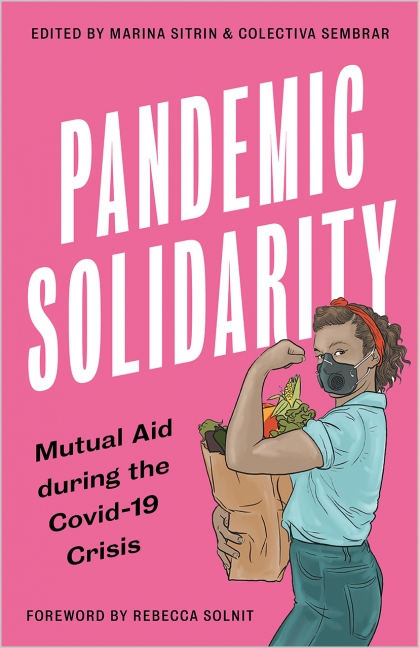 In times of crisis, when institutions of power are laid bare, people turn to one another. Pandemic Solidarity collects firsthand experiences from around the world of people creating their own narratives of solidarity and mutual aid in the time of the global crisis of Covid-19.

The world’s media was quick to weave a narrative of selfish individualism, full of empty supermarket shelves and con-men. However, if you scratch the surface, you find a different story of community and self-sacrifice. Looking at eighteen countries and regions, including India, Rojava, Taiwan, South Africa, Iraq and North America, the personal accounts in the book weave together to create a larger picture, revealing a universality of experience - a housewife in Istanbul supports her neighbour in the same way as a teacher in Argentina, a punk in Portland, and a disability activist in South Korea does.

Moving beyond the present, these stories reveal what an alternative society could look like, and reflect the skills and relationships we already have to create that society, challenging institutions of power that have already shown their fragility.

Marina Sitrin is an Assistant Professor of sociology at SUNY Binghamton, New York. She is the author of Horizontalism: Voices of Popular Power in Argentina (AK Press, 2006); Everyday Revolutions: Horizontalism and Autonomy in Argentina (Zed Books, 2012), the co-author of They Can’t Represent US! Reinventing Democracy from Greece to Occupy (Verso, 2014).

Rebecca Solnit is the author of more than twenty books on feminism, western and indigenous history, popular power, social change and insurrection, hope and disaster, including A Paradise Built in Hell: The Extraordinary Communities That Arise in Disaster (Penguin, 2010) and Hope in the Dark: Untold Histories, Wild Possibilities (Haymarket, 2016).

'Just what we need so desperately in this moment. How we come out of this pandemic will shape the future of humanity. Now, as never before, we have to break the deadly logic of capital. A beautiful and important book.'

- John Holloway, author of 'Change the World Without Taking Power'

'In the midst of a global crisis, we must listen, learn, and build with people from around the world - the essays and insights collected here help us do just that. A crisis is a turning point, and this valuable book can serve as a guide to a better future.'

- Astra Taylor, director of 'What Is Democracy?'

'These stories teach us of the enormous potential for love and resistance in a world threatened by apocalyptic capitalism.'

'Mutual aid, solidarity and commoning become most visible during periods of deep crises. This book inspires us all on the path to social change.'

- Massimo De Angelis, author of 'Omnia Sunt Communia: On the Commons and the Transformation to Postcapitalism'

A dispatch from Portugal about racism, the pandemic and the problems inherent in governments’ responses.

END_OF_DOCUMENT_TOKEN_TO_BE_REPLACED
Back to Top
X