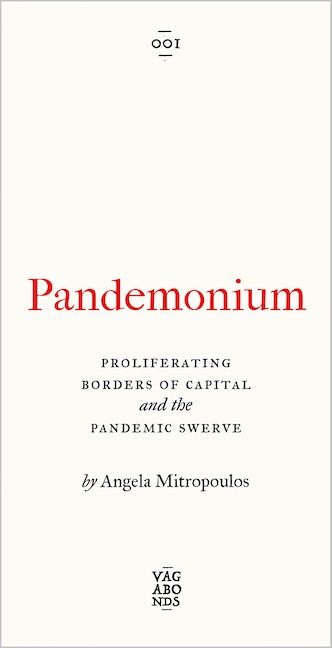 Proliferating Borders of Capital and the Pandemic Swerve

In November 2019, a new strain of coronavirus appeared in Wuhan, China, and quickly spread across the world. Since then, the pandemic has exposed the brutal limits of care and health under capitalism. Pandemonium examines how a virus became a crisis along racial, class and gendered borders, shaped by the legacies of colonialism in which deaths are passed off as inevitable. It questions the dangers of capitalist understandings of order and disorder, of health and disease, and of life itself.

From the origins of the crisis at the crossroads of the bio-pharmaceutical industry, fossil-fueled pollution, and the privatisation of healthcare in China, Mitropoulos follows the virus' spread as governments embraced reckless strategies of containment. The failures of quarantines and travel bans racialised the disease, and the reluctance to expand healthcare capacity deepened already perilous inequalities. Untested pharmaceuticals and right-wing demands to 'reopen the economy' no matter the human cost reveal a world where the very definition of 'the economy' is fundamentally shifting.

epidemiology—one that is informed by an understanding of the interdependence of living things, involving both the power of combined human agency and the molecular swerve.

Angela Mitropoulos is a theorist and academic based in Sydney, Australia. Among other writings which track shifting boundaries and movements in the history of philosophy, science, aesthetics, politics and economics, she is the author of Contract and Contagion: From Biopolitics to Oikonomia (2012).