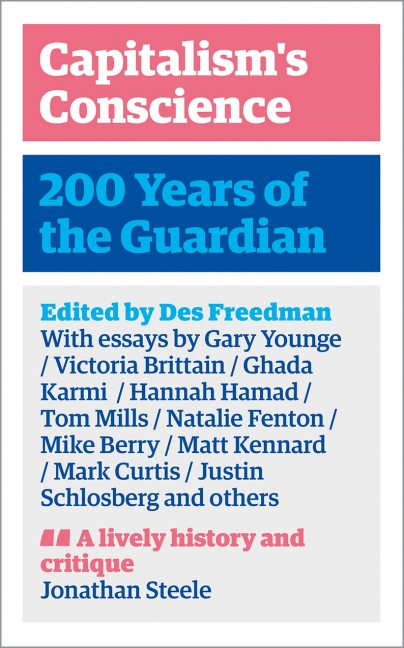 200 Years of the Guardian

'A lively and well-researched history and critique' - Jonathan Steele, former Chief Foreign Correspondent for the Guardian

Since its inception in Manchester in 1821 as a response to the 1819 Peterloo Massacre, the Guardian has been a key institution in the definition and development of liberalism. The stereotype of the 'Guardianista', an environmentally-conscious, Labour-voting, progressively-minded public sector worker endures in the popular mythology of British press history.

Yet the title has a complex lineage and occupies an equivocal position between capital and its opponents. It has both fiercely defended the need for fearless, independent journalism and handed over documents to the authorities; it has carved out a niche for itself in the UK media as a progressive voice but has also consistently diminished more radical projects on the left.

Published to coincide with its 200th anniversary, Capitalism's Conscience brings together historians, journalists and activists in an appraisal of the Guardian's contribution to British politics, society and culture - and its distinctive brand of centrism. Contextualising some of the main controversies in which the title has been implicated, the book offers timely insights into the publication's history, loyalties and political values.

'A lively and well-researched history and critique of Britain's best newspaper, exposing the ideological contradictions and editorial tensions which generally keep the 'Guardian' allied to a soft liberalism but shies away from radical or socialist answers to capitalism's recurring crises'

- Angela McRobbie, Professor of Communications at Goldsmiths, University of London

'A page turner - reveals the liberal establishment in all its ingloriousness, sprinkled with a few moments of integrity'

'Liberalism typically champions particular campaigns for social justice but distances itself from challenges to the state and economy that produces these injustices. At last a book which reveals this serious problem. A must read for all Guardian readers!'