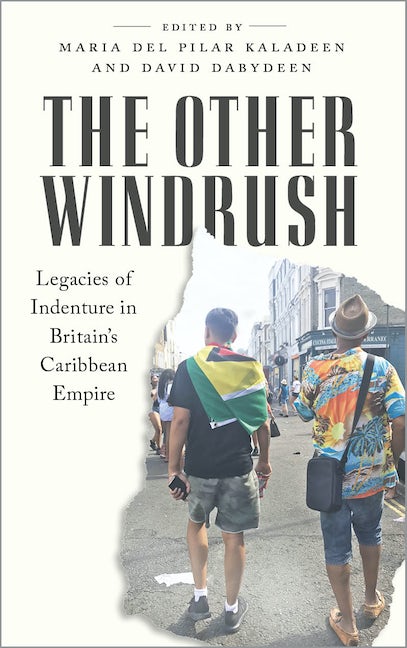 'This illuminating, vivid volume is a fitting tribute to the experiences of migration' - Hanif Kureishi

Between the arrival of the HMT Empire Windrush in 1948 and the passing of the 1971 Immigration Act, half a million people came to the UK from the Caribbean. In the aftermath of the 2018 Windrush Scandal, the story of the Windrush Generation is more widely known than ever. But is it the whole story?

Through a series of biographical essays, poems and articles, The Other Windrush shines a light on the hidden history of a 'minority within a minority': Caribbean migrants of Indian and Chinese descent - often the descendants of indentured labourers - who were the 'invisible passengers' of the Windrush generation.

Both highlighting the diversity of their lives and cultural backgrounds, and delving into the largely forgotten history of the system of indenture in the British Caribbean, The Other Windrush makes a unique addition to the literature on migration and the British Empire.

Maria del Pilar Kaladeen is a writer and Associate Fellow at the Institute of Commonwealth Studies. She is the co-editor of the anthology We Mark Your Memory: Writing from the Descendants of Indenture.

David Dabydeen is an award-winning poet and novelist who worked at the University of Warwick's Yesu Persaud Centre for Caribbean Studies. He previously served as Guyana's Ambassador and Permanent Delegate to UNESCO and as Ambassador to China.

‘This illuminating, vivid volume is a fitting tribute to the experiences of migration, struggle and celebration that shaped those communities born out of the system of Caribbean indenture’

'Through moving and insightful stories and testimonies, the legacies of indenture are powerfully inscribed'

'This kaleidoscopic survey illuminates corners of modern Britain that have been overlooked. Filed with vivid stories about the Chinese and Indian contribution to Caribbean culture, it is also a vibrant history of immigration to the UK: a colourful work in every sense'

'I cried when I read this beautifully furious book on the life, loves and heroic struggles of my brave ancestors, the unfree indentured Indian and Chinese men and women who have been consciously and cruelly written out of British and Caribbean history'

'Indentured labour was a unique form of labour invented and perfected by the British. This book analyses its history, development and human consequences with remarkable insight and points to its dark moral underside'

- Bhikhu Parekh, political theorist, academic and member of the House of Lords

List of figures
Introduction: ‘My Father’s Journey Made Me Who I Am’
Maria del Pilar Kaladeen and David Dabydeen
1. What’s in a Face? - Jonathan Phang
2. Black Turkey - David Dabydeen
3. From BG to GB - Elly Niland
4. Made through Movement - Nalini Mohabir
5. Interview: ‘Trinidad Implants in you this Wonderful Sense of Carnival’ - Bob Ramdhanie
6. A Tribute to the Life of Rudy Narayan (1938–1998) - Lainy Malkani
7. Pepperpot - Gordon Warnecke
8. Scratching the Surface: A Speculative Feminist Visual History of other Windrush Itineraries - Tao Leigh Goffe
9. Everything of Us - Maria del Pilar Kaladeen
10. Three Rivers - Mr Gee
11. Interview: ‘Invited then Unwelcomed’ - Charlotte Bailey
Contributor Biographies
Index