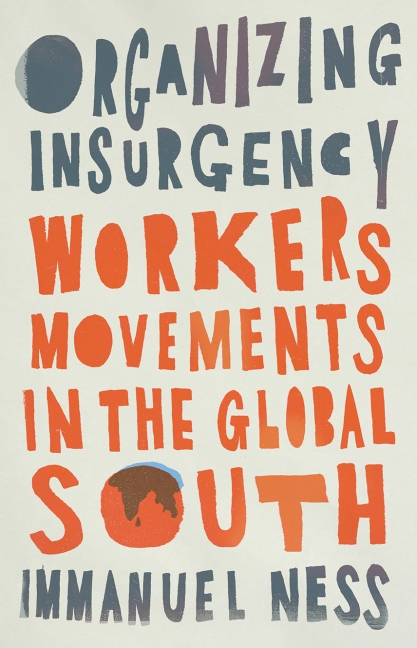 Workers' Movements in the Global South

The Global South is the epicentre of workers' struggles today

Workers in the Global South are doomed through economic imperialism to carry the burden of the entire world. While these workers appear isolated from the Global North, they are in fact deeply integrated into global commodity chains and essential to the maintenance of global capitalism.

Looking at contemporary case studies in India, the Philippines and South Africa, this book affirms the significance of political and economic representation to the struggles of workers against deepening levels of poverty and inequality that oppress the majority of people on the planet.

Immanuel Ness shows that workers are eager to mobilise to improve their conditions, and can achieve lasting gains if they have sustenance and support from political organisations. From the Dickensian industrial zones of Delhi to the agrarian oligarchy on the island of Mindanao, a common element remains – when workers organise they move closer to the realisation of socialism, solidarity and equality.

'In these depressing times, when the neoliberal consensus has acquired an aura of inevitability akin to the Laws of Physics, it is a breath of fresh air to read serious scholarship that challenges this consensus'

'The rising anti-imperialist struggles in both the underdeveloped and developed countries are signalling the resurgence of the world proletarian-socialist revolution. Immanuel Ness makes a just call for forging a global workers' movement by reinvigorating and further developing the trade union movement, the workers' parties and political movements to fight for the rights and interests of the working class and the rest of the suffering people'

- Professor Jose Maria Sison, Chairperson Emeritus of the International League of Peoples' Struggle, Founding Chairman, Communist Party of the Philippines and Co-Founder of the National Democratic Front of the Philippines

- Richard Wolff, Professor Emeritus of Economics at the University of Massachusetts Amherst

'Timely and relevant. The theoretical framing around political organisation of the working class for social transformation is much-needed. Its energetic, provocative scholarship with insightful case studies from across the South makes it essential reading for academics and activists alike'

'A valuable book that addresses the necessity of revolutionary organization in times of socialist ideological resurgence. Essential reading to anyone wishing to understand the proletarianization of the Global South. Its in-depth examination of modern forms of imperialist exploitation and revolts contribute to comprehending areas rarely covered by mainstream social science'

'Challenges the prevailing racializing perception of the Southern worker held in the North as powerless and without agency. 'Organizing Insurgency' is a must read for an understanding of imperialism, which has normalized a lack of awareness of the sustaining role of the southern agricultural and industrial workers in global capitalism'