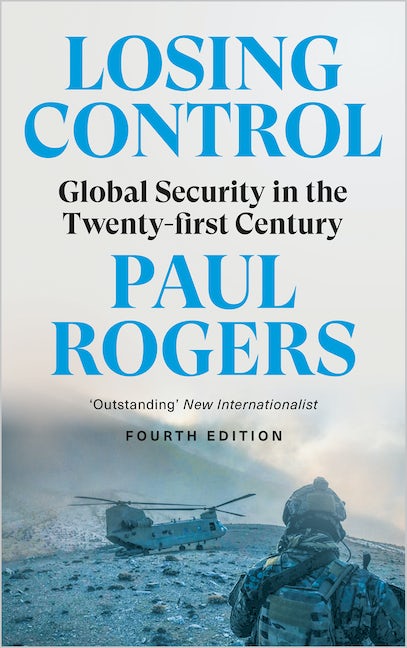 Global Security in the Twenty-first Century

'Outstanding ... combines a glimpse behind the security screens with a sharp analysis of the real global insecurities - growing inequality and unsustainability' - New Internationalist

Written in the late 1990s, Losing Control was years, if not decades, ahead of its time, predicting the 9/11 attacks, a seemingly endless war on terror and the relentless increase in revolts from the margins and bitter opposition to wealthy elites.

Now, more than two decades later and in an era of pandemics, climate breakdown and potential further military activity in the Middle East, Asia and Africa, Paul Rogers has revised and expanded the original analysis, pointing to the 2030s and '40s as the decades that will see a showdown between a bitter, environmentally wrecked and deeply insecure world and a possible world order rooted in justice and peace.

'Outstanding ... combines a glimpse behind the security screens with a sharp analysis of the real global insecurities - growing inequality and unsustainability'

- Bruce Kent, Vice-President of the CND

'This fourth edition more clearly than ever demonstrates the connections between the neoliberal economy, environmental degradation and the false assumptions of security as a state rather than human-centred problem. This book makes the argument with clarity for a total rethink of how we live together'

'With a magisterial overview of the last half century, this book offers a prophetic yet ultimately hopeful political and social challenge: to re-think economics, the environment and security for the sake of future generations. A compelling read, it is bold and realistic, principled and pragmatic'

'Paul Rogers tells it as it is. If you want to really understand the global security challenges we face, then read this book. His analysis is an urgent call to act against rampant inequalities, the diffusion of violence, ecological crisis, and the militarism that underpins a security paradigm of elite control'

'For twenty years now, the four editions of Losing Control have been analysing how the economic, environmental and security paradigms that dominate world politics have become increasingly brittle. Paul Rogers writes with realism, radicalism and, ultimately, with optimism'

'A passionate, personal and, above all, thought-provoking case for a fundamental rethink of international security in the 21st century. I would strongly recommend this book to new students of security and international affairs'

Losing Control:
Why everything went wrong in Afghanistan

The West is finally retreating from Afghanistan, leaving its people in the hands of the Taliban, a force that never went away. In this extract, Paul Rogers looks at the war to understand why things went so horribly wrong.

END_OF_DOCUMENT_TOKEN_TO_BE_REPLACED
Back to Top
X