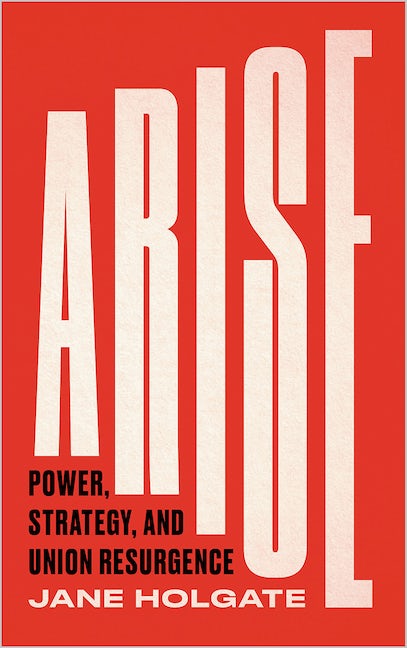 In Arise, Jane Holgate argues that unions must revisit their understanding of power in order to regain influence and confront capital. Drawing on two decades of research and organising experience, Holgate examines the structural inertia of today’s unions from a range of perspectives: from strategic choice, leadership and union democracy to politics, tactics and the agency afforded to rank-and-file members.

In the midst of a neoliberal era of economic crisis and political upheaval, the labour movement stands at a crossroads. Union membership is on the rise, but the ‘turn to organising’ has largely failed to translate into meaningful gains for workers. There is considerable discussion about the lack of collectivism among workers due to casualisation, gig work and precarity, yet these conditions were standard in the UK when workers built the foundations of the 19th-century trade union movement.

Drawing on history and case studies of unions developing and using power effectively, this book offers strategies for moving beyond the pessimism that prevails in much of today’s union movement. By placing power analysis back at the heart of workers' struggle, Holgate shows us that transformational change is not only possible, but within reach.

Jane Holgate is Professor of Employment Relations at the University of Leeds. She is the co-editor of Union Voices: Developing Organizing in the UK (Ithaca 2012) and has held a number of positions in the trade union movement as an NGA 'mother of chapel', Unison branch chair and regional council delegate, UCU caseworker and secretary of Hackney Trades Union Council. She has worked closely on research projects with trade unions, including the GMB, TGWU, CWU, Bectu, Usdaw and the Trades Union Congress.

'Jane Holgate is a brilliant thinker. By centring her thesis on power, this book contributes to our understanding of what strategies and mechanisms enable workers to stand a chance at achieving justice'

- Jane McAlevey is an organiser, scholar and author of 'No Shortcuts: Organizing for Power in the New Gilded Age' (Oxford University Press, 2018)

'A must-read - by a top-class scholar, union educator and activist, and written with exceptional clarity. Readers will come away with a deeper understanding of the world and with the tools to change it'

'Part history text, part employment relations research; Jane Holgate's book critiques decades of union renewal strategies in the UK and questions assumptions from both the left and right over how to regain collective power rather than just recruit new members'

- Dave Smith is a blacklisted construction worker and co-author of 'Blacklisted: The Secret War Between Big Business and Union Activists' (New Internationalist, 2016)

'A brilliant treatise on how to think about worker power in the context of sweeping structural change. It is well past time for labour scholars to return to this fundamental question and Jane Holgate has made an indispensable contribution to the canon'

- Janice Fine, Professor of Labour Studies and Employment Relations, Rutgers University and Director of Research and Strategy at the Centre on Innovation in Worker Organisation

'An excellent review of the leaps forward and setbacks for workers and their unions, and an invaluable read for Jane Holgate's astute analyses. But that's not what the book is about. It is about power. Power for workers, which is the reason for organising, and which is too often forgotten in the daily struggle. We can continue on the current path to oblivion, with unions becoming little more than legacy politicians, or remember our roots and aggressively organise in new ways with workers in an evolving economy'

'In examining the problems that we have to face to rebuild the movement, this analysis of power, who has it and how to build it, is a must-read for aspiring activists. An essential book for those who are committed to the idea that trade unionism is a vehicle through which we can organise to delivering transformative change for all workers'

'Jane Holgate's experience as an academic and a union activist has given her unique insights that make this book an important read for anyone who wants to understand where unions have been, where they are now and where they need to go'

- Arnie Graf, community organiser with the Industrial Areas Foundation and author of 'Lessons Learned. Stories from a Lifetime of Organizing' (ACTA Publications, 2020)

List of Abbreviations
Series Preface
Acknowledgements
1. Looking to the Past to Understand the Present
2. Let’s Talk about Social Power
3. Harnessing Power in the Late Nineteenth-Century–Early Twentieth-Century ‘Gig Economy’
4. Understanding and Using Levers of Power in the Latter Half of the Twentieth Century
5. Structural Change and the Weakening of the Power of Workers
6. Union Responses to Decline and Loss of Power
7. Organising in Theory: Recruitment in Practice?
8. Leadership, Strategic Choice and Union Power in the Turn to Organising
9. Winning Power is Possible
Notes
Bibliography
Index