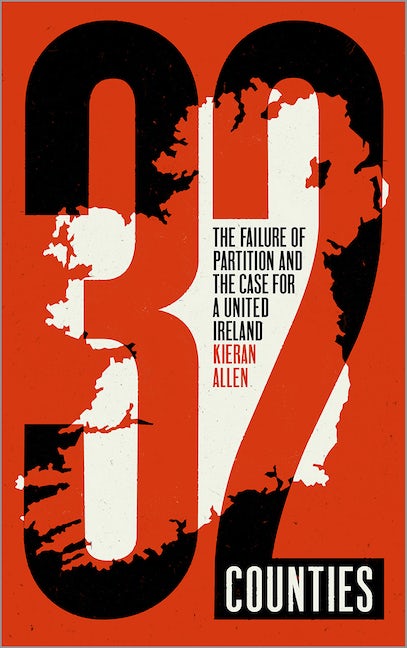 The Failure of Partition and the Case for a United Ireland

Partitioning Ireland was an experiment that has lasted a century. Now it is time for it to come to an end

'This is Irish history seen anew, from below, bristling with practical lessons for working-class struggle today' - Eamonn McCann

The 32 counties of Ireland were divided through imperial terror and gerrymandering. Partition was borne from a Tory strategy to defend the British Empire and has spawned a ‘carnival of reaction’ in Irish politics ever since. Over the last 100 years, conservative forces have dominated both states offering religious identity as a diversion from economic failures and inequality.

Through a sharp analysis of the history of partition, Kieran Allen rejects the view that the 'two cultures' of Catholic and Protestant communities lock people into permanent antagonism. Instead, the sectarian states have kept its citizens divided through political and economic measures like austerity, competition for reduced services and low wages.

Overturning conventional narratives, 32 Counties evokes the tradition of James Connolly and calls for an Irish unity movement from below to unite the North and the Republic into a secular, socialist and united Ireland.

The phrase 'If we don't learn from the past, we are doomed to repeat it', seems more apt about Ireland than anywhere else. To look at Ireland through the prism of class is to see not what might have been but what brightness the future might bring. Kieran Allen's new book is Irish history seen anew, from below, bristling with practical lessons for working-class struggle today'

'Showing how partition was not to separate two hostile cultures but a strategy to defend the British empire, it traces the grisly story through to the return of the national question today when Irish unity can be posed again on a new socialist basis. Essential reading for anyone who wants to change Irish society'

'An important contribution to a debate that has been reignited. It is an excellent tool for activists who are navigating the arguments in favour of ending partition'

'If there is one book you need to read to grasp what’s going on in Ireland, and Northern Ireland specifically, it must be Kieran Allen’s 32 Counties’

Preface
1. ‘A Carnival of Reaction’: The Origins of Partition
2. Republicans and Loyalists
3. British Imperialism
4. Managed Sectarianism
5. Protestant Workers
6. The Return of the National Question
7. The Left and Irish Unity
8. What Kind of United Ireland?
Notes
Index

The worst sectarian rioting in years has broken out in Northern Ireland and the mainstream media is blaming ‘both sides’. While this might have the appearance of fairness and balance, it misses the deeper causes.

END_OF_DOCUMENT_TOKEN_TO_BE_REPLACED
Back to Top
X