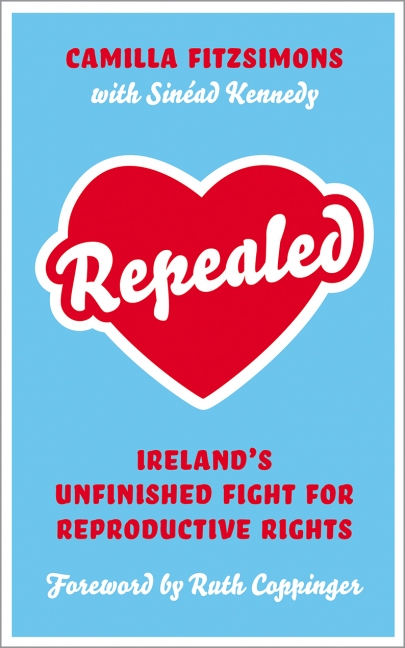 In Ireland, 2018, a constitutional ban that equated the life of a woman to the life of a fertilised embryo was overturned and abortion was finally legalised. This victory for the Irish Repeal movement set the country alight with euphoria. But, for some, the celebrations were short-lived – the new legislation turned out to be one of the most conservative in Europe. People still travel overseas for abortions and services are not yet fully commissioned in Northern Ireland.

This book traces the history of the origins of the Eighth Amendment, which was drawn up in fear of a tide of liberal reforms across Europe. It draws out the lessons learned from the groundbreaking campaign in 2018, which was the culmination of a 35-year-long reproductive rights movement and an inspiring example of modern grassroots activism. It tells the story of the 'Repeal' campaign through the lens of the activists who are still fighting in a movement that is only just beginning.

Camilla Fitzsimons is an activist and a member of the Dublin West Pro Choice group. She works at Maynooth University and  is the author of Community Education and Neoliberalism.

Sinéad Kennedy is the co-founder of The Coalition to Repeal the Eighth and an executive member of Together for Yes. She works at Maynooth University and is the co-editor of The Abortion Papers, Ireland.

‘A must-read for anyone interested in reproductive rights. It is a call-to-arms in the ongoing global fight for abortion access and reproductive justice’

- Mairead Enright, Reader in Feminist Legal Studies, University of Birmingham and a founding member of Lawyers for Choice

‘An in-depth account of how the campaign was fought and won. It’s a fluidly written book filled with clear facts, passionate arguments and compassionate vignettes’

Foreword – Ruth Coppinger
Prologue
1. Introducing the Real Heroes
2. Reproductive Oppressions in Ireland
3. Ireland's Dark History of Injustices Against Women - Camilla Fitzsimons & Sinead Kennedy
4. After the Eighth, the Slow Movement for Repeal - Sinead Kennedy
5. No Quiet Revolution - the Grassroots Gathers
6. The Together for Yes Campaign
7. The Battle Continues
8. Where to Next in the Struggle for Reproductive Rights?

The Fight for Repeal:
An activist’s story

Camilla Fitzsimons discusses the Irish pro-abortion campaign that consumed her life, and how far we need to go to secure full abortion rights across the world.

END_OF_DOCUMENT_TOKEN_TO_BE_REPLACED
Back to Top
X