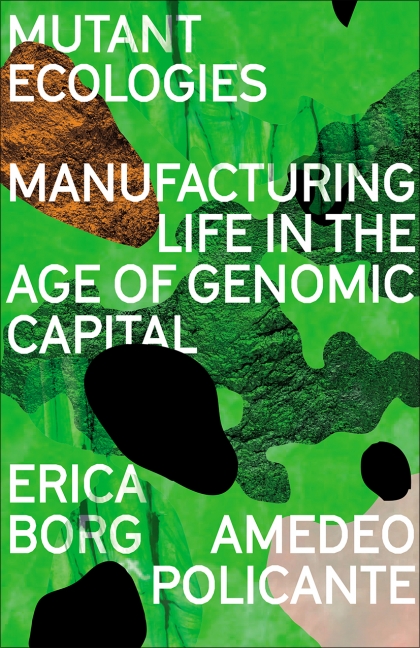 Manufacturing Life in the Age of Genomic Capital

by Erica Borg and Amedeo Policante

How capitalism is reconfiguring the very texture of life

Mutant Ecologies traces the spinning of new synthetic threads into the web of life. It is a critical cartography of the shifting landscapes of capital accumulation conjured by recent developments in genomic science, genome editing and the biotech industry.

CRISPR crops, fast-growing salmons, heat-resistant Slick™ cows, Friendly™ Mosquitoes, humanised mice, pigs growing human organs – these are but a few of the dazzling new life-forms that have recently emerged from corporate and university laboratories around the world, all promising to lubricate the circuits of capital accumulation in distinct ways. The deliberate induction of genetic mutations is increasingly central to business operations in a number of sectors, from agriculture to pharmaceuticals.

While the Nobel Committee recently proclaimed the life sciences to have entered 'a new epoch', the authors show how these technological innovations continue to operate within a socio-historical context defined by the iron rules of capitalist competition and exploitation. Capital no longer contents itself with simply appropriating the living bodies of plants and animals. It purposefully designs their internal metabolism, and in that way it redesigns the countless living vectors that constitute the global biosphere. It is driving a biological revolution, which will ripple through the everyday lives of people everywhere.

Erica Borg is a geographer and political ecologist based at King's College, London. Their research focuses on the relations between capitalism, colonialism, patriarchy and ecological crisis.

Amedeo Policante is a Researcher at the Nova University of Lisbon. His writings interrogate the nexus of extraction, exploitation and expropriation that fuels the contemporary world market. He is the author of two books: The Pirate Myth and The New Mercenaries.

'Money is making biology mutate. Capital nowadays reaches ever deeper into organisms to reformat their genes, metabolisms, and more. This book is a lucid and provocative guide to this brave new world'

'An ambitious critique of biopolitical economy. The battle against capital requires a struggle over the means of genomic production, and 'Mutant Ecologies' provides an essential, historically and theoretically rigorous assessment of the terrain'

'An incandescent illumination of capital’s own molecular revolution. With deep research and smart theory, Borg and Policante take us into the planet factory’s latest abodes of production, where genomic tools manufacture life-forms tailor-made for accumulation on a scorching planet; a must-read'

'A major work, reinventing the critique of political economy in this new conjuncture of capital accumulation’

- Sandro Mezzadra, Professor of Political Philosophy at the University of Bologna