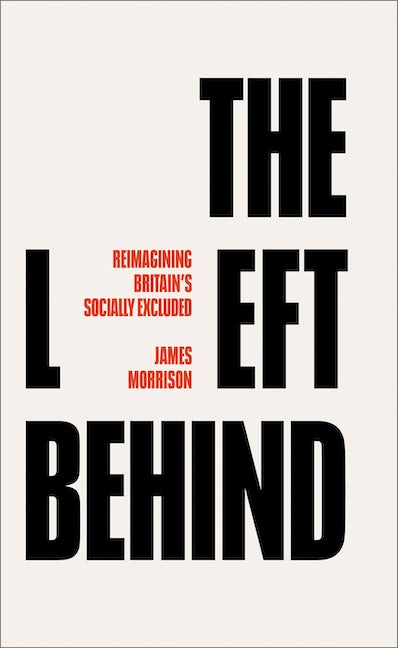 'The Left Behind' is a defining motif of contemporary British political discourse. It is the thread that knits together the 2016 Brexit referendum, the crumbling of the fabled 'Red Wall' in the North, and the pernicious culture war being waged today. But who are the Left Behind?

James Morrison goes in search of the reality behind the rhetoric, offering the first comprehensive, historical analysis of the origins, uses and meanings of the term. He interrogates the popular archetype of the Left Behind - as a working class, leave-voting white male from a former industrial heartland - and situates the concept in the context of longstanding, demonising discourses aimed at communities seen as backward and 'undeserving'.

Analysing national newspaper coverage and parliamentary discussions, and drawing on interviews with MPs, community leaders, charities and people with direct lived experiences of poverty and precarity, The Left Behind grapples with the real human cost of austerity for neglected post-industrial communities and other marginalised groups across the world, and the stigmatising discourse that does little to serve them.

James Morrison is a reader in journalism at Robert Gordon University. He spent over a decade as a staff reporter for newspapers including the Independent on Sunday as well as working as a freelance writer for the Guardian. His previous books include Scroungers: Moral Panics and Media Myths.

'Engaging […] tackles the stereotyping of so-called 'left behind' communities by journalistic and political opinion-formers, questioning how the most disadvantaged have been framed (or blamed) for delivering Brexit’

'A sophisticated interrogation of how the 'left behind' are mythologised, problematised and weaponised by those whose insights rarely stretch beyond regional condescension and recycled tropes. Morrison deftly unpicks the left-behind imaginary and the culture wars, fantasies and resentments it feeds into - and sketches a powerful map for how to generate a more expansive, solidaristic imaginary'

List of tables
About the author
Acknowledgements
Introduction: Inventing and appropriating ‘the left behind’
1. Working class, ‘underclass’ and collapsing-class identity: The roots of the left behind
2. Politics, the press and the construction of the post-Brexit left behind
3. How to solve a problem like the left behind: Condescension or contempt?
4. Fear and loathing on social media: Trolling and championing the left behind
5. Speaking up for the left behind: The voices of disadvantaged Britain
Conclusion: Towards a manifesto for ‘unite and rule’
Appendix: Research methodologies
References
Index

The pundits are trying to drag a story out of the election results that James Morrison argues just isn’t there.

A Liz in Toryland:
The irrelevance of Tory culture wars

While Truss outbids Sunak to revive culture-war rhetoric, it’s stagnant wages and rising prices – not ‘woke’ issues – that are worrying Britain’s ‘left behind’.

END_OF_DOCUMENT_TOKEN_TO_BE_REPLACED
Back to Top
X