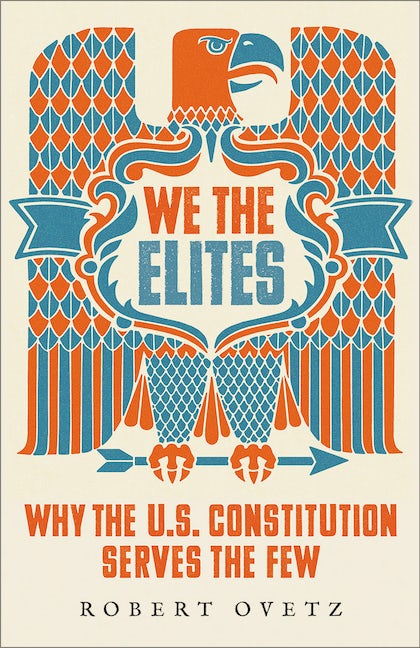 Why the US Constitution Serves the Few

A new, radical reading of the US constitution

Written by 55 of the richest white men, and signed by only 39 of them, the US constitution is the sacred text of American nationalism. Popular perceptions of it are mired in idolatry, myth and misinformation - many Americans have opinions on the constitution but have little idea what it says.

This book examines the constitution for what it is – a rulebook for elites to protect capitalism from democracy. Social movements have misplaced faith in the constitution as a tool for achieving justice when it actually impedes social change through the many roadblocks and obstructions we call 'checks and balances'. This stymies urgent progress on issues like labour rights, poverty, public health and climate change, propelling the American people and rest of the world towards destruction.

Robert Ovetz's reading of the constitution shows that the system isn't broken. Far from it. It works as it was designed to.

'A crucial and timely corrective about what words like democracy and freedom actually meant to the Founders. A gift to serious analysts of US politics - but, more importantly, to those who would build a system that serves people rather than property'

'This ambitious, stimulating, thoughtful, exceedingly informative book sets a new standard in scholarship on the vaunted US Constitution'

- Gerald Horne, author of 'The Dawning of the Apocalypse'

'At a moment when the country is facing a constitutional crisis, it is well to understand what the Constitution is. This close analysis unravels in detail the achievement of the Framers 'to create a perpetual power of the elite minority to check the will of the majority', to ensure that the minority of the opulent would be protected from the threat of popular democracy'

'Powerfully addresses how the constitution and US politics reinforce capitalism and its dysfunction, offering crucial insights for the big changes coming'

'The Constitution is a problem hiding in plain sight. Everyone thinks they know what it means, but no one is willing to look too closely for fear that it might mean something different or that it might mean nothing it all. Robert Ovetz is one of the few who are willing to grapple with the problem head on. He deserves credit for his boldness and intellectual integrity'

- Dan Lazare, author of ‘The Frozen Republic: How the Constitution Is Paralyzing Democracy’

Introduction: The United States - Democracy or Republic?
1. The Framers' Vision
2. Preamble: "Intoxicating Draughts of Liberty Run Mad"
3. Congress: Justice to Property
4. Congress: Designed for Inefficiency
5. Congress: Power of the Purse
6. Executive: The Rule of One
7. Executive: Unrestrained Global Guardian of Property
8. Judiciary: The Servant Above His Master
9. Amendments and Ratification: An Act of Force and Not of Right
10. Beyond Constitution

Robert Ovetz talks about how the U.S. Constitution was created to serve the interests of the propertied elites, and how it continues to thwart political and economic democracy today.

END_OF_DOCUMENT_TOKEN_TO_BE_REPLACED

VIDEO: Robert Ovetz – Introducing ‘We the Elites: Why the US Constitution Serves the Few’

Robert Ovetz introduces his book ‘We the Elites’, and explains how the US constitution was created in order to protect private property, and curtail political and economic democracy

END_OF_DOCUMENT_TOKEN_TO_BE_REPLACED
Back to Top
X