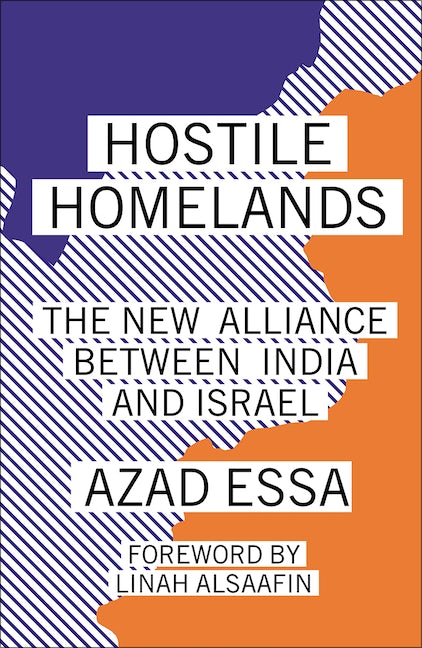 The New Alliance Between India and Israel

Under Narendra Modi, India has changed dramatically. As the world attempts to grapple with its trajectory towards authoritarianism and a 'Hindu Rashtra' (Hindu State), little attention has been paid to the linkages between Modi's India and the governments from which it has drawn inspiration, as well as military and technical support.

India once called Zionism racism, but, as Azad Essa argues, the state of Israel has increasingly become a cornerstone of India's foreign policy. Looking to replicate the 'ethnic state' in the image of Israel in policy and practice, the annexation of Kashmir increasingly resembles Israel's settler-colonial project of the occupied West Bank. The ideological and political linkages between the two states are alarming; their brands of ethnonationalism deeply intertwined.

Hostile Homelands puts India's relationship with Israel in its historical context, looking at the origins of Zionism and Hindutva; India's changing position on Palestine; and the countries' growing military-industrial relationship from the 1990s. Lucid and persuasive, Essa demonstrates that the India-Israel alliance spells significant consequences for democracy, the rule of law and justice worldwide.

Azad Essa is an award-winning journalist and author based between Johannesburg and New York City. He is currently a senior reporter for Middle East Eye covering American foreign policy, Islamophobia and race in the US. He is the author of The Moslems are Coming and Zuma's Bastard and has written for Al Jazeera, The Washington Post, Foreign Policy and the Guardian.

Linah Alsaafin is a Palestinian journalist and writer whose work has appeared in OpenDemocracy, Al Monitor, Middle East Eye, the Times Literary Supplement, and Al Jazeera.

'Today’s Israel and Modi’s India are natural partners, sharing values of racist ethnocracy and illegal annexation, and for Israel, offering a market for military and other advanced technology. This valuable study traces the complex evolution of their relationship from their independence to its recent blossoming as the societies and the international context changed, providing particularly rich insights into India’s development through this period.'

'Azad Essa’s brilliant and courageous book is the definitive treatment of the overlooked alliance between the far-right wing governments of India and Israel. This text is essential reading for the escalating neo-fascist forces in our turbulent times.'

‘This extraordinary book exposes a powerful alliance, hidden from the global attention and media, that will affect the lives of many of us. This is a crucial contribution challenges the distorted Western discourse on democracy, rights and justice and offers a new genealogy and a brave interpretation of these crucial human concerns.’

‘Hostile Homelands quest is formidable and timely. Azad Essa lays bare the historically malignant roots of an often overlooked and underestimated kinship between two ideologies—Zionism and Hindutva—hungry for land and hungrier for dominance.’

‘This is a brilliantly written book and a call for global solidarity. Essa reveals the mutual agenda of the unholy India-Israeli ethno-nationalistic alliance, showing just why both those states are a danger to progessive internationalism. In dealing with the rise of Zionism, along with Modi's capture of state power in India, he deals with their ramifications on Kashmir and Palestine, on Indian diaspora and Israel's role in Africa.’

'For decades, India’s leaders spoke in hushed tones about their relationship with Israel. Azad Essa’s thoroughly-researched and crisply-written Hostile Homelands reveals the long history of their alliance and shows how it is built on shared supremacist ideological projects whose devastating and inhumane consequences are borne by Palestinians and Kashmiris living under occupations. This is an essential, must-read book.'

- Siddhartha Deb, author of the Beautiful and The Damned: New Life in India

‘Hostile Homelands is an authoritative study of the past and present of India-Israel relations. It reveals a troubling convergence of Hindu nationalist and Zionist worldviews. Equally, the book is a useful primer for thinking about how and why illiberal, authoritarian and Islamophobic forces are building alliances, globally.’

'A revealing exposé…This book is an essential read that challenges the typical understanding of Zionism as an exclusively European phenomenon and Hindu nationalism as a provisional Indian experience.'

'In this volume, Essa forces us to confront the grotesque end-game of colonial violence - Modi's India and Zionist Israel. The enduring and shape-shifting connections between these ethnonationalist entities offer a profound wake-up call, a realization that today, the most vocal among the world's purported democracies are, at their core, the most profoundly anti-democratic.'

‘A meticulously researched and well-crafted book on the under-covered subject of the ever evolving relationship between India and Israel. Essa insightfully explores what happens when a nation negotiates the tension between principles and interests— and what happens when, particularly under the ethnonationalism of Narendra Modi, they converge’

'This is the definitive book on Indian-Israel relations that we have been waiting for. Hostile Homelands is not only an intellectual tour de force; just as importantly it will also foster new solidarities and anti-imperialist organizing.'

Foreword – Linah Alsaafin
1. A Story of Two Partitions
2. The Military-Industrial Complex
3. Hindutva and Zionism: A Story of Kinship
4. The Indian Diaspora and the Israeli Lobby in the United States
5. Kashmir and Palestine: A Story of Two Occupations
Acknowledgements and Postscript