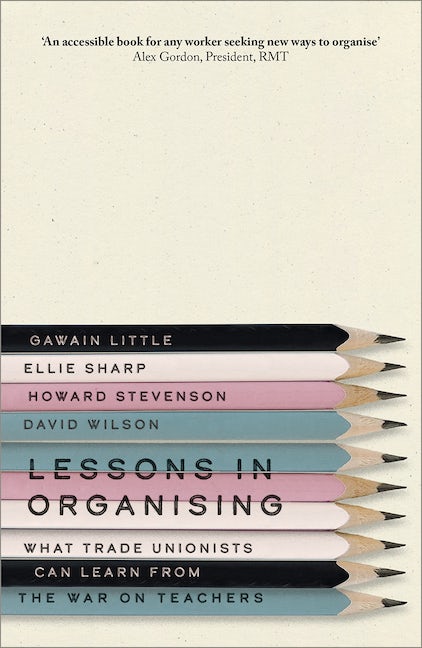 What Trade Unionists Can Learn from the War on Teachers

The heart of any trade union is its reps and activists organising in the workplace. After years of membership decline across sectors, a renewed recognition of this essential fact is behind the 'turn to organising' in the union movement today.

This turn to collective organising builds strength at a local as well as a national level, and also aids in mobilising around a wider range of political issues from campaigning against austerity to taking action for the environment. In recent years, this fusion of workplace organising and national campaigning has been exemplified by Europe's largest education trade union, the National Education Union (NEU).

In Lessons in Organising, the authors bring together activist, academic and union official perspectives to assess the potential (and the limitations) of the 'turn to organising' and set out the case for a new transformative trade unionism for the 21st century.

Gawain Little is a member of the National Executive of the NEU and chairs its International Solidarity Committee. He is the editor of Education for Tomorrow.

Ellie Sharp is a primary school teacher, NEU activist and past chairperson of the London NEU New & Young Educators Network.

Howard Stevenson is Professor of Educational Leadership and Policy Studies at the University of Nottingham.

David Wilson is Assistant General Secretary (Campaigns and Communications) at the National Education Union (NEU), and previously was Head of Organising in the National Union of Teachers (NUT).

‘An excellent review of the attack on teachers and their unions, by authors well placed to point to ways to improve the fight back and resistance’

'This book is a fascinating and insightful contribution: on the machinations of organising on the ground, straight from those on the frontline; agitating educators, successful in building density during a period of unprecedented anti-union attacks. A must-read for anyone serious about building worker confidence in education and beyond.'

‘This book is an important contribution to the development of education unionism. We’re reminded of the vital role of workplace organisation, failure of social partnership, and the need of an active rank and file in order to fight neoliberalism in education.’

‘The crisis of organized labor is not reserved to the United States. Through this book we are introduced to the crisis in Britain and the steps that have been taken to renew and transform trade unionism into a 21st century movement! Welcome to an in depth look at the challenges and possibilities for a different approach to trade unionism.’

- Bill Fletcher, Jr., coauthor of Solidarity Divided; author of "They're Bankrupting Us" - And Twenty Other Myths about Unions.

‘Makes clear the reality of organising in a sector that has been systematically privatised by multiple governments and one where the word vocation is used as an excuse to exploit those working within it. This book also shows that even in difficult circumstances it is possible to resist constant attacks from the mainstream media, government cuts and corporate greed. A must read for those in unions seeking to renew and grow.’

‘This accessible book is for any worker seeking new ways to organise class struggle.’

‘A cogent and passionate case for the continued renewal of teacher trade unionism. It is a renewal that is urgently needed not just to defend living standards and working conditions but to salvage and recreate the very purpose, and values, of education itself.’

- Melissa Benn, author of School Wars and Life Lessons: The Case for a National Education Service.

‘A devastating critique of the battle waged by the government over the purpose of education.’

‘The authors [of this book] have used their experiences as activists to examine the theory and practice of union organising in tangible ways using real-life case studies from the UK. However, because “Lessons in Organising” examines some fundamental truths about union campaigning, its messages are universal, highly relevant to other places and other unions including our own.’

‘provides important direction for all of us committed to strengthening the labor movement and winning the fight against corporate "reform" in education.’

1. Introduction
2. The Crisis of Organised Labour
3. Class Wars: Public Education and the War on Teachers
4. Building Power in the Workplace
5. Breaking Neoliberal Hegemony in Education
6. Organising in a Crisis
7. Lessons in Organising
References