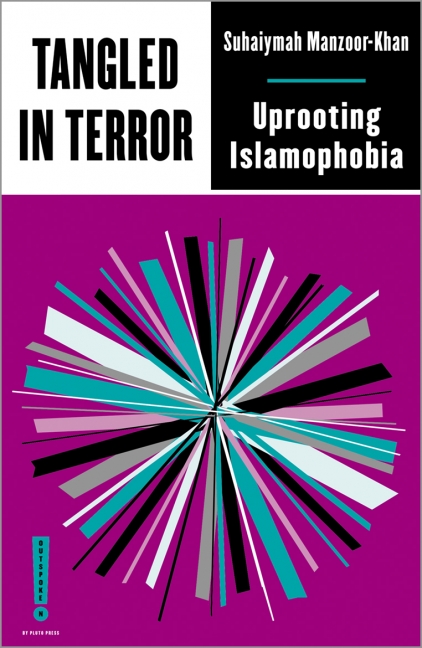 The roots of Islamophobia run deep and affect us all. We must resist it together.

Islamophobia is everywhere. It is a narrative and history woven so deeply into our everyday lives that we don't even notice it – in our education, how we travel, our healthcare, legal system and at work. Behind the scenes it affects the most vulnerable, at the border and in prisons. Despite this, the conversation about Islamophobia is relegated to microaggressions and slurs.

Suhaiymah Manzoor-Khan reveals how Islamophobia not only lives under the skin of those who it marks, but is an international political project designed to divide people in the name of security, in order to materially benefit global stakeholders. It can only be truly uprooted when we focus not on what it is but what it does.

Tangled in Terror shows that until the most marginalised Muslims are safe, nobody is safe.

'Courageously makes explicit the implicit unfreedoms of our society'

'I am profoundly grateful to Suhaiymah Manzoor-Khan for writing this book. It is brave. It is necessary. It is true. It is what we Muslims have been waiting for. A brilliant, powerful and moving account of Islamophobia, not as an individual moral deficiency, but as rooted in colonial histories of white supremacy and global capitalism. For me, Tangled in Terror triggered long-felt pain, anger, grief at the abuse, torture and genocidal violence Muslims are made to suffer the world over. Violence which not only evades accountability, but seems at times not even to register as harm. Manzoor-Khan carefully traces the origins and shape of the historical and ongoing terrorisation of Muslims, revealing untold injustices, and showing us how to untangle ourselves from terror and instead find threads of resistance'

- Nadine El-Enany, author of '(B)ordering Britain' and Co-Director of the Centre for Research on Race and Law

'A fearless writer who cuts through nonsense. Suhaiymah's voice is one of the most exciting of her generation'

'This is the first time the breadth and depth of the Islamophobia we face has been collated in one place and analysed with such precision. It really feels like 'our' book'

'A surgical, unflinching account of the forces that have converged to cast Muslims as a permanent threat while profiting off our marginalisation'

'Suhaiymah's writing is fierce and clarifying. She understands that the task is to resist oversimplified definitions of Islamophobia and instead turn the reader's attention toward its political function - how it increases proximity to violence and impoverishes us all'

- Preti Taneja, author of the Desmond Elliot Prize-winning book 'We That Are Young'

'One of Britain’s most promising young voices’

'Unapologetically abolitionist, 'Tangled in Terror' resonates as a powerful act of refusal and resistance. It lays the foundations for a resistance that unequivocally demands an end to ALL forms of violence and ALL forms of racism, together'

- Helen Brewer, migrant justice activist, and a member of the Stansted 15

'Offers a rich account of the ways Islamophobia upholds systems of extraction, exploitation and domination, propelled by the urgency of our collective political predicament'

'A deeply insightful intervention on the ongoing entrenchment of white supremacy and islamophobia. 'Tangled in Terror' is a motivator, to understand, reflect, and take action in deliberate, radical and life-affirming ways'

'This eloquent book dissects the structures of power which create, uphold and perpetuate Islamophobia and tells us what it is like to be a Muslim woman in this intensely hostile climate'

'Conveys the trauma that is so often unspoken of in discussions of state enabled bigotry against Muslims, written with deep clarity'

'Tangled in Terror' brought tears to my eyes and fire to my heart. The gift of this book is feeling the world changing around you with each word. An astounding, ground-shaking piece of work.'

- Sabrina Mahfouz, playwright, poet, writer and editor of 'The Things I Would Tell You'

'A bold, brave and brilliant account of Islamophobia as a global system of domination and as a continuation of a colonial project, written with clarity and compassion'

'Suhaiymah has produced crystal clarity out of the darkest fog. ‘Tangled In Terror’ is a visceral dissection of the industry of Islamophobia'

‘Written with such clarity. It’s really validating, as a Muslim woman, to have someone say exactly what you’re thinking’

‘An essential book, not only for Muslims but for anyone wanting to learn and understand more about the roots and current reality of Islamophobia. It’s an enriching and insightful read into what discussions around Islamophobia should be focusing on and where our energies should be prioritised. In the face of so much division and hate, it’s also a book of hope’

Acknowledgements
Introduction: Not what it is but what it does
1. A history of race-making: Inventing ‘the Muslim threat’
2. Never-ending pillaging in the name of international security
3. Who is safer when the nation is secure?
4. Racist prediction as public duty: Prevent
5. Whose parallel lives? Which British values?
6. The revolution must be counter-extremist: Co-opting resistance
7. Compromising Islam for patriotism: A secular state? A Western Islam?
8. Destroying life and hoarding wealth in the name of border security
9. The feminist and queer-friendly West? The patriarchal rest?
10. Islamophobia’s beneficiaries
Conclusion: A safe world on our own terms

END_OF_DOCUMENT_TOKEN_TO_BE_REPLACED

Suhaiymah Manzoor-Khan introduces ‘Tangled in Terror’, and argues that we should all care about Islamophobia, because it affects all of us.

Suhaiymah Manzoor-Khan joins us on the podcast to discuss her new book Tangled in Terror: Uprooting Islamophobia

END_OF_DOCUMENT_TOKEN_TO_BE_REPLACED
Back to Top
X