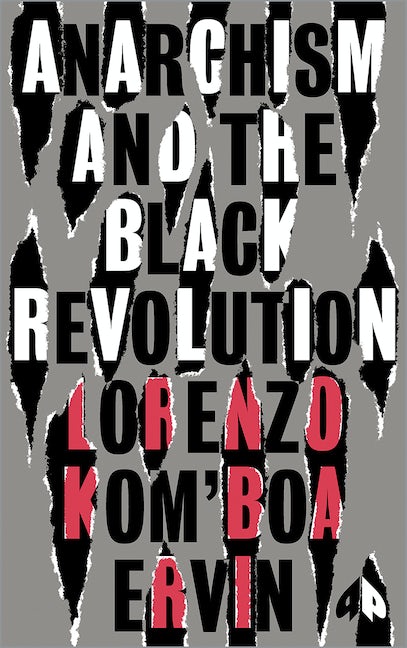 ***This book has a rich history of being read by prisoners across the US, creating a bedrock of radical learning and dissent within the US prison system since the 1970s. To honor this, Pluto will donate copies to incarcerated comrades. To help fund this effort, please use the coupon code 'ERVINSOLIDARITY' at the checkout, which will add a small amount to the price of the book***

'A powerful – even startling – book that challenges the shibboleths of 'white' anarchism'. Its analysis of police violence and the threat of fascism are as important now as they were at the end of the 1970s. Perhaps more so' - Peter James Hudson, Black Agenda Report

Anarchism and the Black Revolution first connected Black radical thought to anarchist theory in 1979. Now amidst a rising tide of Black political organizing, this foundational classic written by a key figure of the Civil Rights movement is republished with a wealth of original material for a new generation.

Anarchist theory has long suffered from a whiteness problem. This book places its critique of both capitalism and racism firmly at the centre of the text. Making a powerful case for the building of a Black revolutionary movement that rejects sexism, homophobia, militarism and racism, Lorenzo Kom'boa Ervin counters the lies and distortions about anarchism spread by its left- and right-wing opponents alike.

New material includes an interview with writer and activist William C. Anderson, as well as new essays, and a contextualizing biography of the author's inspiring life.

Lorenzo Kom'boa Ervin is an American writer, activist and black anarchist. He is a former member of SNCC, the Black Panther Party and Concerned Citizens for Justice. Following an attempt to frame him on weapons charges and for threatening the life of a Ku Klux Klan leader, Ervin hijacked a plane to Cuba in February 1969. While in Cuba, and later Czechoslovakia, Ervin grew disillusioned with the authoritarianism of state socialism. Captured by the CIA in Eastern Europe, he was extradited to the US, put on trial and sentenced to life in prison in 1970. He was introduced to anarchism whilst in prison, inspiring him to write Anarchism and the Black Revolution in 1979. Released after 15 years, Ervin remains politically active.

Joy James is the Ebenezer Fitch Professor of the Humanities at Williams College and author of Resisting State Violence among other works, and the editor of the Angela Y. Davis Reader and co-editor of The Black Feminist Reader.

'A powerful – even startling – monograph that challenges many of the shibboleths of 'white' anarchism, the received wisdom of Black Marxist thought, and the pieties of liberalism, white, Black or otherwise. It is also stunningly prescient. Its analysis and critiques of police violence and the threat of fascism are as important now as they were at the end of the 1970s. Perhaps more so'

Foreword by William C. Anderson
Catalyst by Joy James
Introduction
1. Anarchism Defined: A Tutorial on Anarchist Theory and Practice
2. Capitalism and Racism: An Analysis of White Supremacy and the Oppression of Peoples of Color
3. Anarchism and the Black Revolution
4. Pan-Africanism or Intercommunalism?
Ungovernable: An Interview with Lorenzo Kom’boa Ervin
Index

Anarchism and the Black Revolution:
The extraordinary life of Lorenzo Kom'boa Ervin

It’s not an exaggeration to say that Lorenzo Kom’boa Ervin has changed the world. William C. Anderson recounts the life of the Black anarchist who hijacked a plane to Cuba to escape political persecution at the hands of the US state,...

PODCAST: ‘Radicals in Conversation’
Black Anarchism Across the Generations

JoNina Ervin speaks to Lorenzo Kom’boa Ervin and William C. Anderson about Black anarchism, in a special collaboration with the Black Autonomy Podcast.

END_OF_DOCUMENT_TOKEN_TO_BE_REPLACED
Back to Top
X