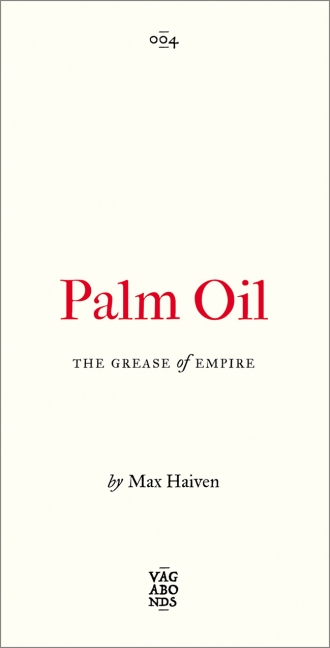 The Grease of Empire

A fascinating story of how palm oil has shaped our world

It's in our food, our cosmetics, our fuel and our bodies. Palm oil, found in half of supermarket products, has shaped our world. Max Haiven uncovers how the gears of capitalism are literally and metaphorically lubricated by this ubiquitous elixir.

From its origins in West Africa to today's Southeast Asian palm oil superpowers, Haiven's sweeping, experimental narrative takes us on a global journey that includes looted treasures, the American system of mass incarceration, the history of modern art and the industrialisation of war. Beyond simply calling for more consumer boycotts, he argues for recognising in palm oil humanity's profound potential to shape our world beyond racial capitalism and neo-colonial dispossession.

One part history, one part dream, one part theory, one part montage, this kaleidoscopic and urgent book asks us to recognise the past in the present and to seize the power to make a better world.

'Powerfully demonstrates how, by following the history of a key commodity, we can reconstruct the logic of imperial capitalism: its destruction of land and bodies, its drive to constantly reduce the means of our reproduction, its relentless production of oppressive regimes. The story it narrates is crucial for our understanding of the terrains of struggle and the material conditions of solidarity between different social justice movements'

'Jampacked with insights that will surprise and haunt readers, Haiven's arguments about the centrality of palm oil to colonial history and modern life are compelling, persuasive, and far-reaching'

'Whether you're reading this on a screen or a printed page, you're implicated in the global palm oil trade. In this lovely book, Max Haiven takes us on a whirlwind tour of how that came to be, guiding us through the workings of the global engines that have long been lubricated by the grease of empire'

- Raj Patel, co-author of 'A History of the World in Seven Cheap Things: A Guide to Capitalism, Nature, and the Future of the Planet'

Whose grease?
Whose punishment?
Whose fetish?
Whose weapon?
Whose fat?
Whose surplus?
Whose sacrifice?
Whose story?
Acknowledgments
Notes

Palm Oil:
The Grease of Empire

One part history, one part dream, one part theory, one part montage, Palm Oil takes us on a global journey to uncover how the gears of capitalism are literally and metaphorically lubricated by this ubiquitous elixir.

END_OF_DOCUMENT_TOKEN_TO_BE_REPLACED
Back to Top
X