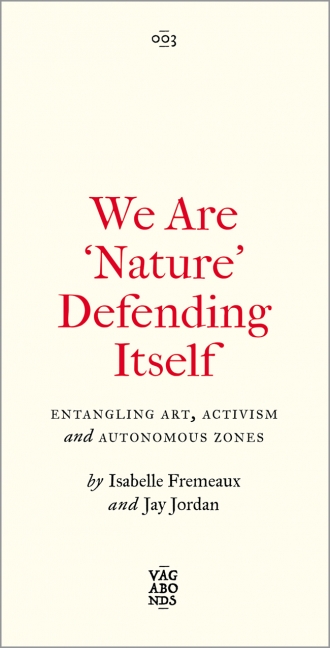 We Are 'Nature' Defending Itself

by Isabelle Fremeaux and Jay Jordan

Chronicles the story of the ZAD (zone to defend), a resistant land occupation emerging out of a decades-long struggle which stopped a new airport project

In 2008, as the storms of the financial crash started to blow, Isabelle Fremeaux and Jay Jordan deserted the metropolis, their academic jobs and entered a world of art and activism that seemed anchorless and without territory. They embarked on a journey across Europe searching for postcapitalist utopias.

They arrived at a place French politicians had declared 'lost to the republic', known by those who inhabited and defended it as la ZAD (the 'zone to defend'): a messy, muddy, imperfect but extraordinary canvas of commoning, illegally occupying 4,000 acres of wetlands owned by an airport. It was a place where, in 2018, the 40-year-long struggle snatched an incredible victory, defeating the capitalist project through a powerful cocktail that merged creation and resistance, building and fighting.

We Are 'Nature' Defending Itself is the story of that place and its people. Fremeaux and Jordan blend rich, raw eyewitness accounts with theory, inspired by a diverse array of approaches, from the neo-animism of recent anthropology, to revolutionary biology, insurrectionary writings and radical art history.

Published in collaboration with the Journal of Aesthetics & Protest.

Isabelle Fremeaux is a popular educator and action researcher. She was formerly Senior Lecturer in Media and Cultural Studies at Birkbeck College London. Along with Jay Jordan, she is a coordinator of The Laboratory of Insurrectionary Imagination.

Jay Jordan is co-founder of Reclaim the Streets (1995-2000) and the Clandestine Insurgent Rebel Clown Army, and co-author of We Are Everywhere: The Irresistible Rise of Global Anticapitalism (Verso, 2003) and A User's Guide to Demanding the Impossible (Minor Compositions, 2011). He is a coordinator of The Laboratory of Insurrectionary Imagination.

'We need stories of victory! We need stories of transformative imagination and wild adventures that somehow succeed against all odds. Jay and Isabelle think about organizing and activism like nobody else. They've given us more than an account--they've created a new myth that has the added benefit of being true'

Part IV: Flourishing
No Commoning without Commoners—Synergies and Regards—No Commoners without Rituals—Life is Feeling—200 Years of Art and the World Is Getting Worse—An Art of Life