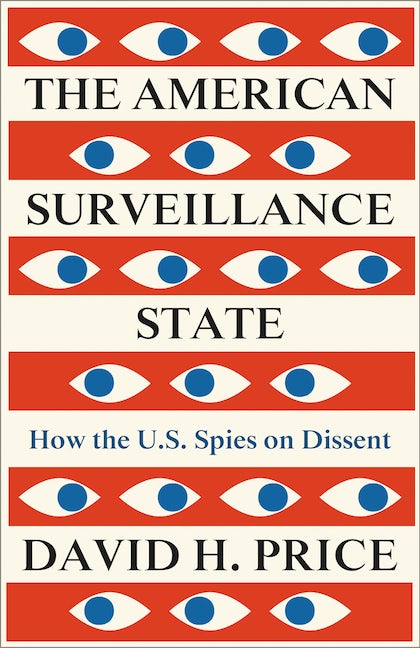 How the U.S. Spies on Dissent

The first complete history of the American surveillance state, from J. Edgar Hoover to Obama

When the possibility of wiretapping first became known to Americans they were outraged. Now, in our post 9/11 world, it's accepted that corporations are vested with human rights, and government agencies and corporations use computers to monitor our private lives. David H. Price pulls back the curtain to reveal how the FBI and other government agencies have always functioned as the secret police of American capitalism up to today, where they luxuriate in a near-limitless NSA surveillance of all.

Price looks through a roster of campaigns by law enforcement, intelligence agencies and corporations to understand how we got here. Starting with J. Edgar Hoover and the early FBI's alignment with business, his access to 15,000 pages of never-before-seen FBI files shines a light on the surveillance of Edward Said, Andre Gunder Frank and Alexander Cockburn, Native American communists and progressive factory owners.

Price uncovers patterns of FBI monitoring and harassing of activists and public figures, providing the vital means for us to understanding how these new frightening surveillance operations are weaponised by powerful governmental agencies that remain largely shrouded in secrecy.

David H. Price is Professor of Anthropology at Saint Martin’s University’s Department of Society and Social Justice. He is the author of a number of books on the FBI and CIA, and has written articles for The Nation, Monthly Review, CounterPunch, Guardian and Le Monde. His work has been translated into five languages.

'Few writers have done more than David Price to drag the secret history of America out of the shadows and into the clarifying light of public scrutiny. In a nation obsessed with secrets, the biggest and darkest secret of all is the one Price exposes here: the deviously surreptitious - and often illegal - lengths our own government has gone to surveil and disrupt the daily lives of its own citizens'

'Wielding a finely-honed anthropological perspective and armed only with the Freedom of Information Act, David Price has spent decades of meticulous research in uncovering the sordid and often absurd history of American political surveillance. Rather than Orwell's fictional tales of Big Brother, his book makes extensive use of the files compiled by the FBI and its legions of informers to show how the realities of governmental monitoring and harassment impacted on the lives of law-abiding women and men whose words and deeds were deemed to threaten dominant power structures in American society'

'Relentlessly dissects the history of the American surveillance state, from the Palmer Raids to the Snowden Files and beyond. Price’s razor-sharp analysis exposes the malignant tissue connecting America’s spy agencies to the forces of capital'

Part I: The Long View: Historical Perspectives of American Surveillance
1. J. Edgar Hoover and the FBI’s Institutionalization of Surveillance
2. Memory's Half-life: Notes on a Social History of Wiretapping in America.
3. The New Surveillance Normal: Government and Corporate Surveillance in the Age of Global Capitalism.

Part II: Lanting Those with a Communist Taint
4. The Dangers of Promoting Peace During Times of [Cold] War: Gene Weltfish, the FBI, & the 1949 Waldorf Astoria’s Cultural and Scientific Conference for World Peace
5. Tribal Communism Under Fire: Archie Phinney and the FBI
6. The FBI’s History of Undermining Legal Defenses: From Jury Panel Investigations to Defense Lawyer Surveillance Programs
7. Agents of Apartheid: Ruth First and the FBI’s Historical Role of Enforcing Inequality

Part IV: Policing Global Inequality
15. E. A. Hooton and the Biosocial Facts of American Capitalism
16. Walt Whitman Rostow and FBI Attacks on Liberal Anti-Communism
17. André Gunder Frank, the FBI, and the Bureaucratic Exile of a Critical Mind.
18. Angel Palerm and the FBI: Monitoring a Voice of Independence at the Organization of American States
19. The FBI’s Pursuit of Saul Landau: Portrait of the Radical as a Young Man