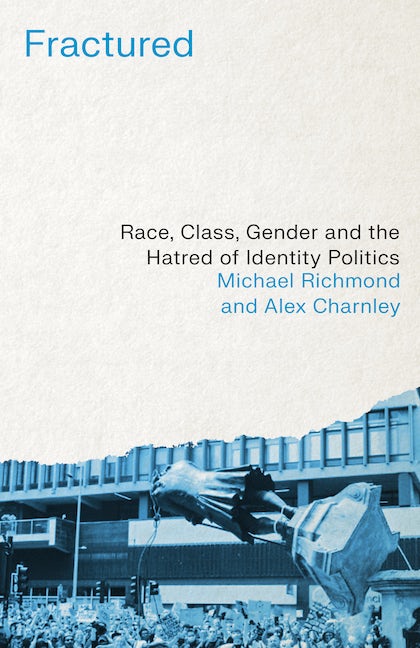 Race, Class, Gender and the Hatred of Identity Politics

by Michael Richmond and Alex Charnley

An antidote to political infighting and the culture wars

Identity politics has been a smear for decades. The right use it to lament the loss of free speech, while many on the left bemoan it as the end of class politics. It has been used to dismiss movements such as Black Lives Matter and brought seemingly progressive people into the path of fascism. It has emboldened the march of the transphobes.

In Fractured, the authors move away from the ahistorical temper of the identity politics debate. Instead of crudely categorising race, gender and sexuality as fixed and immutable identities, or forcing them under the banner of 'diversity', they argue that these categories are inseparable from the history of class struggle under British and US capitalism.

Through an appraisal of pivotal historical moments in Britain and the US, including Black feminist and anticolonial traditions on both sides of the Atlantic, the authors question the assumptions of the culture war, offering a refreshing and reasoned way to understand how historical class struggles were formed and continue to determine the possibilities for new forms of solidarity in an increasingly dangerous world.

Michael Richmond was a co-editor of the Occupied Times and of Base Publication. He has written for publications including OpenDemocracy, New Socialist and Protocols. He tweets @Sisyphusa.

Alex Charnley was illustrator and co-editor of the Occupied Times and of Base Publication. He tweets @steinosteino.

‘A searing materialist critique of the historical origins of attacks on Identity Politics from the right, a clarifying text that analyses the strategic purpose of the imagined ‘culture war’ that continues to engulf mainstream politics’

‘Class reductionism sheds little light on our crisis-ridden times. Instead, ’Fractured’ uncovers both the historical entanglements of class and race and the multitude of solidarities that continually rise to oppose oppression. Richmond and Charnley gift us with the analysis, and hope, we need to fight on’

'Issues a powerfully argued appeal to the left to finally understand that “Prioritising solidarity for those most marginalised or under attack is not about guilt or charity or ‘virtue-signalling’. It is part of what can get everyone free"'

- Sophie Lewis, author of 'Full Surrogacy Now: Feminism Against Family' and 'Abolish The Family: A Manifesto For Care and Liberation'

‘A sharp and lucid rejoinder to all the political trends that in recent years have imbued "identity politics” with magically divisive powers. ‘Fractured’ is essential to understanding anti-racist politics today’

'An important and timely analysis rich in historical detail. It challenges crude denunciations of 'identity politics' on both right and left, and reiterates that intersectionality is indeed political economy'

- Alison Phipps, Professor of Sociology at Newcastle University, author of ‘Me, Not You’

'This sharp, thoughtful, generous little book helps us see the many roads that lead to better worlds, arguing that to get there we need to abandon those noisy, nasty, noxious debates on “identity politics”. It clears ground, carefully tracing histories of resistance and reaction, reminding us that the working class is and always has been manifold - and therein lies our strength'

- Luke de Noronha, academic and writer at the Sarah Parker Remond Centre, University College London and author of 'Deporting Black Britons: Portraits of Deportation to Jamaica' and co-author, with Gracie Mae Bradley, of 'Against Borders: The Case For Abolit

‘This is a stirring book, full of inspiration, insight, provocation. ‘Fractured’ insists that if we are to grasp the radical possibilities of connection, we must first understand the political legacy of division. Expect to be educated, made to think, or better still, urged to reconsider’

- Vron Ware, author of ‘Beyond the Pale’

END_OF_DOCUMENT_TOKEN_TO_BE_REPLACED
Back to Top
X