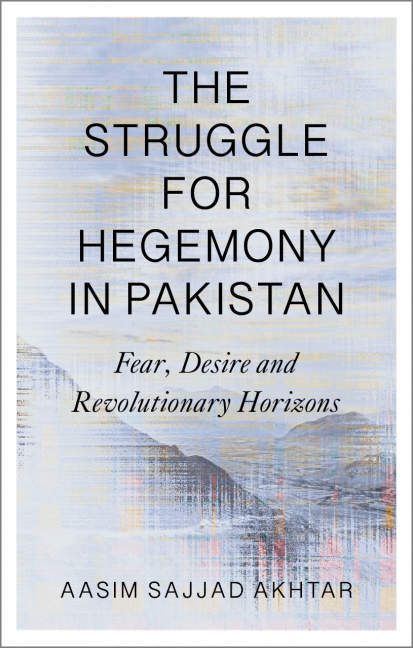 The Struggle for Hegemony in Pakistan

The collapse of neoliberal hegemony in the western world following the financial crash of 2007-8 and subsequent rise of right-wing authoritarian personalities has been described as a crisis of 'the political' in western societies. But the crisis must be seen as global, rather than focusing on the west alone.

Pakistan is experiencing rapid financialisation and rapacious capture of natural resources, overseen by the country's military establishment and state bureaucracy. Under their watch, trading and manufacturing interests, property developers and a plethora of mafias have monopolised the provision of basic needs like housing, water and food, whilst also feeding conspicuous consumption by a captive middle-class.

Aasim Sajjad-Akhtar explores neoliberal Pakistan, looking at digital technology in enhancing mass surveillance, commodification and atomisation, as well as resistance to the state and capital. Presenting a new interpretation of our global political-economic moment, he argues for an emancipatory political horizon embodied by the 'classless' subject.

Aasim Sajjad Akhtar is Associate Professor of Political Economy at the National Institute of Pakistan Studies, Quaid-i-Azam University, Pakistan. He is the author of three books, most recently The Politics of Common Sense: State, Society and Culture in Pakistan. He writes for DAWN, one of Pakistan's leading newspapers.

'Shows how an aspirational idea of the middle class reinforces the subordination of dispossessed labour, ethnic minorities in peripheral territories, terrorists and deviant dissenters. This wide-ranging book is sure to stimulate critical scholarship and organic intellectual activism both inside and outside South Asia'

'Akhtar powerfully channels the spirit of Gramsci and Fanon to critique neoliberal hegemony in Pakistan - and to diagnose the next great battlefield for the Afro-Asian Left: the values, aspirations, and solidarities of the digitised youth across core and periphery'

'Drawing with insight on Gramsci, and located in the Global South, this accomplished book is an important contribution to the search for progressive, anti-colonial, and humanist revolutionary politics in Pakistan and beyond'

- John Chalcraft, Professor at the London School of Economics and Political Science

'What is the 'political' in Pakistan, and how does this help update our theories on democratic backsliding and contemporary authoritarianism? Why do we want to think of the middle class at the centre of it all again? Read this book to find out'

- Shandana Mohmand, Research Fellow at the Institute of Development Studies at the University of Sussex

'This path-breaking work follows Antonio Gramsci to trace the processes that have led to middle-class aspirations becoming pervasive in places like Pakistan. It builds an alternative hegemony which counters the processes of depravity and violence, and allows for a more socially just future'

- Kamran Asdar Ali, Professor of Anthropology at the University of Texas, Austin