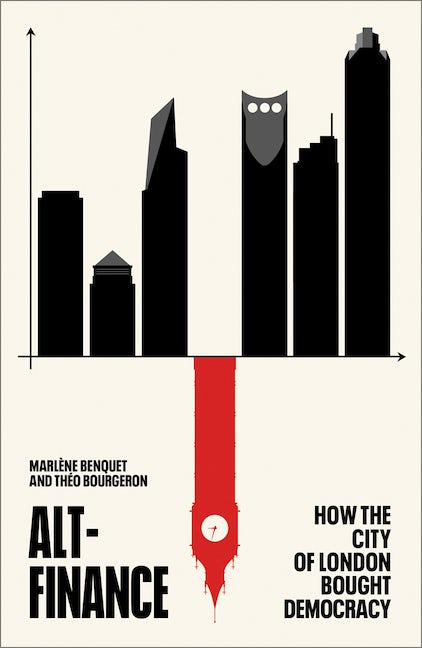 How the City of London Bought Democracy

Powerful financial forces have supported the neoliberal project since the 1980s to advance their interests; but there are now signs that these forces have a new face and a new strategy. The majority of the British finance sector threw its support behind Britain leaving the European Union, a flagship institution of neoliberalism. Beyond this counterintuitive move, what was really happening and why? Alt-Finance examines a new authoritarian turn in financialised democracies, focusing on the City of London, revealing a dangerous alternative political project in the making.

In a clash with traditional finance, the new behemoths of financial capital - hedge funds, private equity firms and real estate funds - have started to cohere around a set of political beliefs, promoting libertarian, authoritarian, climate-denying and Eurosceptic views. Protecting investments, supressing social dissent and reducing state interference are at the core of their mission for a new world order.

By following the money, the authors provide indisputable evidence of these worrying developments. Through a clear analysis of the international dealings of this new authoritarian-libertarian regime, not just in Britain but in the US and Brazil, we can understand how our world is being shaped against our will by struggles between dominant groups.

Marlène Benquet is a CNRS research fellow at the University of Paris Dauphine. She is the co-editor of Accumulating Capital Today: Contemporary Strategies of Profit and Dispossessive Policies.

Théo Bourgeron is a Leverhulme Early Career Fellow at the University of Edinburgh. He has published in international journals such as Economy & Society and Organization, and is the co-editor of Accumulating Capital Today: Contemporary Strategies of Profit and Dispossessive Policies.

Meg Morley is a Paris-based translator. After several years documenting renewable energy and environmental issues for governmental agencies, her work has expanded to include economic policy, political science and sociology.

Théo Bourgeron is a Leverhulme Early Career Fellow at the University of Edinburgh. He has published in international journals such as Economy & Society and Organization, and is the co-editor of Accumulating Capital Today: Contemporary Strategies of Profit and Dispossessive Policies.

'Fascinating. Shows convincingly that Brexit was financed by hedge funds and alternative finance, and that their ultimate goal was to promote a new wave of financial deregulation and buy off our democratic institutions. A great piece of social sciences and a must-read'

- Thomas Piketty, author of 'Capital in the Twenty-First Century'

- Johan Heilbron, Professor in the Sociology of Education at Uppsala University

'An unparalleled look into the class interests driving today's anti-democratic insurgency and its links with the authoritarian libertarianism of the hard right. Ground-breaking'

- Melinda Cooper is based at the Australian National University

'A remarkable foray into the radicalisation of the political order inherent in our contemporary financial condition: an order for which remaining pockets of liberal democracy are no longer of use'

'A dark tale, announcing the new concept of an 'authoritarian libertarianism''

'This provocative opus remarkably demonstrates how conflicts among different fractions of capital were the key drivers of UK's recent Eighteenth Brumaire: Brexit'

- Olivier Godechot, author of 'Wages, Bonuses and the Appropriation of Profit in the Financial Industry'

Introduction
1. The Big Money Behind Brexit
2. Second-Wave Finance vs. the European Union
3. From European Neoliberalism to Authoritarian Libertarianism
Epilogue: The Drumbeat of War
List of Tables
Notes