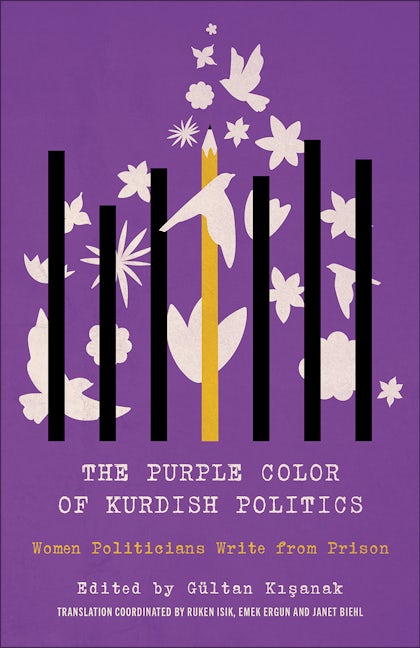 The Purple Color of Kurdish Politics

Gültan Kışanak, a Kurdish journalist and former MP, was elected co-mayor of Diyarbakır in 2014. Two years later, the Turkish state arrested and imprisoned her. Her story is remarkable, but not unique. While behind bars, she wrote about her own experiences and collected similar accounts from other Kurdish women, all co-chairs, co-mayors and MPs in Turkey; all incarcerated on political grounds.

The Purple Color of Kurdish Politics is a one-of-a-kind collection of prison writings from more than 20 Kurdish women politicians. Here they reflect on their personal and collective struggles against patriarchy and anti-Kurdish repression in Turkey; on the radical feminist principles and practices through which they transformed the political structures and state offices in which they operated. They discuss what worked and what didn't, and the ways in which Turkey's anti-capitalist and socialist movements closely informed their political stances and practices.

Demonstrating Kurdish women's ceaseless political determination and refusal to be silenced - even when behind bars - the book ultimately hopes to inspire women living under even the most unjust conditions to engage in collective resistance.

Gültan Kışanak is a longtime journalist, politician and anticolonial feminist activist for Kurdish liberation, who was elected to Parliament in 2007 as the MP from Diyarbakır. In 2016 she was arrested and charged with 'being a member of an armed illegal organization', for which she was sentenced to over 14 years imprisonment.

Ruken Isik holds a Ph.D. in the field of Gender and Women’s Studies from the University of Maryland, Baltimore County.

Emek Ergun is an Associate Professor of Women’s and Gender Studies and Global Studies at the University of North Carolina at Charlotte.

- Shahrzad Mojab, Professor at the University of Toronto and co-author of ‘Women of Kurdistan’

'A powerful testament that a caged bird can still sing, this is an inspiring chorus for people world-wide to join hands and carry forth the fight for freedom, and for life, no matter what the circumstances'

- Alpa Shah, author of the award-winning Nightmarch: Among India's Revolutionary Guerrillas, and Professor of Anthropology at London School of Economics

Translation Coordinators’ Preface - Ruken Isik, Emek Ergun, and Janet Biehl
Preface to English Edition - Gültan Kışanak
Overview: The Growing Struggle for Women's Liberation - Gültan Kışanak
1. How Will You Find That Many Women? - Aysel Tuğluk
2. Mother, Child, Prison - Burcu Çelik Özkan
3. We Never Considered It from That Angle - Çağlar Demirel
4. Hurry up and Fix Things-Don't Let Us Down Before Our Husbands- Diba Keskin
5. I Struggled Hard, But I Never Gave Up - Dilek Hatipoğlu
6. We Have Your Keys. You Can Come and Get Them - Edibe Şahin
7. Women's Worked Viewed as Frivolous - Evin Keve
8. You're Going to Eat with the Men? - Fatma Doğan
9. History Has No Love for Women Who Stop and Keep Quiet - Figen Yüksekdağ
10. Three Times Elected, Three Years Barred from Serving - Gülser Yıldırım
11. Being a Woman is Hard … Even Dangerous - Gültan Kışanak
12. Are Men Going to Walk Behind a Woman? - Leyla Güven
13. Mayor, We Don't Dare Say Anything to These Women Anymore - Mukaddes Kubilay
14. One Must Travel from City to City. Women Can't Do It - Nurhayat Altun
15. Women Should Be the Ones to Handle Finances - Sara Kaya
16. This Woman Is Tough as Nails - Sadiye Süer Baran
17. From Prison to Parliament - Sebahat Tuncel
18. Imprisoned for Providing Services - Selma Karakoç
19. One Woman Became Eighty - Yıldız Çetin
20. Is Sir Chiefwoman in? - Zeynep Han Bingöl
21. They've Turned It into a Women’s Municipality - Zeynep Sipçik
22. Breaking Down the Doors - Selma Irmak