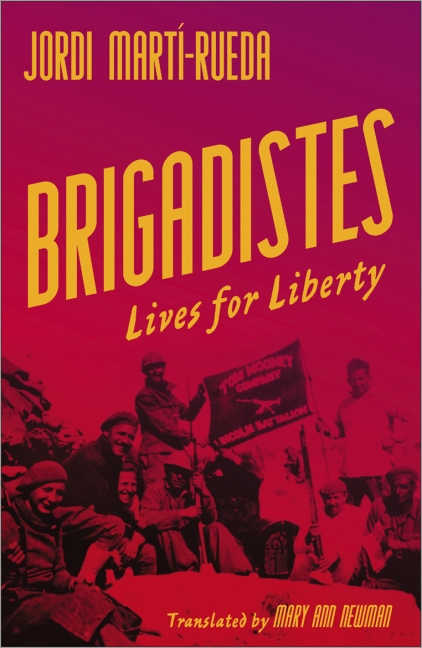 'A real treasure that we can't stop exploring' – La Republica

Felicia Browne decided it was time to put down her paintbrushes and pick up a rifle. Jimmy Yates left Chicago with three books in his bindle, sacrificing them all on the gruelling trek across the Pyrenees. Salaria Kea worked at the front as a nurse, judged by her skill rather than her skin colour...

In 1936 something extraordinary happened. As the threat of fascism swept across the Iberian peninsula, thousands of people from all over the world left their families and jobs to heed the call - No Pasarán! History has never seen a wave of solidarity like it. The Spanish Civil War ended in 1939 with the Republic crushed, but the revolutionary dream of the International Brigades has never burnt out.

Through these 60 illustrated profiles, Brigadistes embroiders an epic story of political struggle with the everyday bravery, sorrow and love of those who lived it.

Jordi Borràs i Abelló is a Catalan illustrator and photojournalist. He specialises in photography of the far right. His bestselling book of photos from the Catalan independence referendum Dies Que Duraran Anys (Days that will last years) was published in 2018.

Mary Ann Newman translates fiction, poetry and essays from Catalan and Spanish. She is a member of the PEN America Translation Committee and won the 2017 NACS Award for Outstanding Scholarship and the J.B. Cendrós Award (Òmnium Cultural) for her translation of Private Life by Josep Maria de Sagarra.

'A real treasure that we can't stop exploring'

'Real and very human ... Reliving these lives, today, is more important than ever'

'Told with skill, sensitivity and rigor, [...] these are the stories that Jordi Mart-Rueda has been collecting for years. They fought for ideals in a battle against fascism - a global threat that remains to this day'

'An excellent introduction to the world of the International Brigades'

'Brings us close to the most human face of war'

'An extraordinary book. Perceptively written, beautifully translated and accompanied by wonderful photographs, it brings us close to the heroism and sacrifices of those who risked their lives in the fight against fascism'

'A beautiful, touching tribute to the everyday heroes who battled so bravely in the fight against fascism'