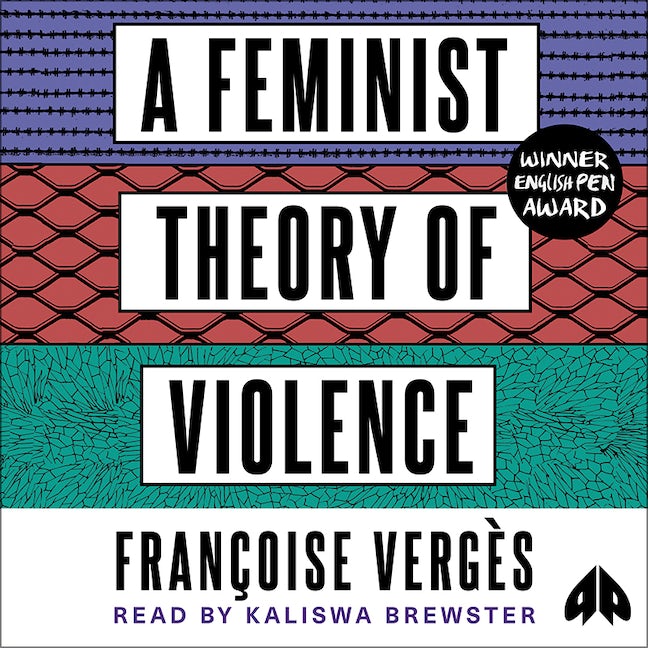 A Feminist Theory of Violence

The State will not protect us from gender violence. Our feminism must be anti-racist and decolonial, and must fight for everyone's safety

The mainstream discourse surrounding gender equality is a repertoire of violence: harassment, rape, abuse, femicide. These words designate a cruel reality. But don't they also hide another reality: that of violence committed with the complicity of the State?

In this book, Françoise Vergès denounces the carceral turn in the fight against sexism. By focusing on 'violent men', we fail to question the sources of their violence. For the author, there is no doubt as to the underlying causes: racial capitalism, ultra-conservative populisms, the crushing of the Global South by wars and imperialist looting, the exile of millions, proliferation of prisons – these all put masculinities in the service of a policy of death.

Against the spirit of the times, Françoise Vergès urges us to refuse the punitive obsession of the State, in favour of restorative justice.

This audiobook edition, beautifully narrated by actor Kaliswa Brewster, is a perfect choice for learning on the go.

Melissa Thackway is an independent researcher and translator. She lectures in African Cinema at Sciences-Po and INALCO in Paris. Her recent translations include Contemporary African Cinema by Olivier Barlet, Tropical Dream Palaces: Cinema-Going in Colonial West Africa by Odile Goerg and African Diasporic Cinema: Aesthetics of Reconstruction by Daniela Ricci.

Kaliswa Brewer is an actor working in voice, film, TV and theatre. Her film credits include Paterno, which starred Al Pacino, and she has recurring roles on the TV shows Billions, Time After Time and Release. She has been a voice actor for numerous animation series, including Marvel, and has worked onstage at theatres across the US. She holds an MFA from American Conservatory Theatre and a Certificate in Classical Theatre from LAMDA in London.

'In this robust, decolonial challenge to carceral feminism, Francoise Vergès elucidates why a structural approach to violence is needed. If we wish to understand how racial capitalism is linked to the proliferation of intimate and state violence directed at women and gender-nonconforming people, we need to look no further than Vergès' timely analysis'

'A powerful and uncompromising text … A stunning reflection on the recurrence of assault – gender-based, sexual, racial violence'

'An important and courageous book, which raises difficult questions and uncovers invisible structures of domination'

'A call to join in the urgent decolonial feminist work of rethinking the practices of (so-called) protection outside of the logics of violence. We have the ability, Vergès insists, to enact a post violent society, to bring another world into being'

- Christina Sharpe, Canada Research Chair in Black Studies in the Humanities at York University, Toronto and author of 'In the Wake: On Blackness and Being'

'A road map of radical emancipatory imaginaries for shaping urgent social and political change. Vergès' arguments rise from the ground up, from the lived experience of grassroots dissent, action and mobilisation against the wounds and damages inflicted by extractive capitalism across the world'

'Françoise Vergès asks a simple question: what actually is the politics of protection? What she reveals is a paradigm spinning analysis. Once she establishes the perspective of people without power, the 'protection' offered by the state and the meta-state of global capital, is exposed as a killing machine of enforcement and endless punishment. A door opening work'

- Sarah Schulman, author of 'The Gentrification of the Mind' and 'Let the Records Show: A Political History of ACT UP'