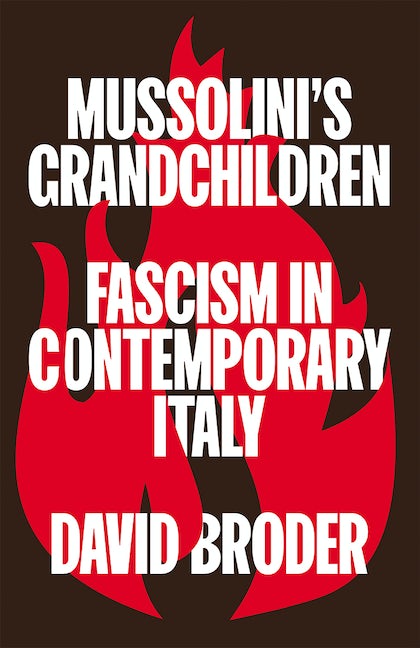 The fascinating story behind Italy's lurch towards fascism

The fastest-rising force in Italian politics is Giorgia Meloni's Fratelli d'Italia a party with a direct genealogy from Mussolini's regime. Surging to prominence in recent years, it has waged a fierce culture war against the Left, polarised political debate around World War II, and emerged as the only major force in opposition to Mario Draghi's government. Eighty years after the fall of Mussolini, his heirs and admirers are again on the brink of taking power. So how exactly has this situation come about?

Mussolini's Grandchildren delves into Italy's self-styled 'post-fascist' movements - rooted in historical fascism yet claiming to have 'transcended' it. David Broder highlights the reinventions of far-right politics since the Second World War, and examines the interplay between a parliamentary face aimed at integrating fascists into the mainstream, and militant fringe groups which, despite their extremism, play an important role in nurturing the broader far right.

Fratelli d'Italia has retained its hegemony over fascist subcultures whilst embracing a raft of more pragmatic policy positions, fusing harsh Islamophobia and anti-communism with support for the European Union and NATO. As countervailing anti-fascist forces in Italian society wane, the far-right party's mission to redeem historical fascism, legitimise its political heirs and shift the terrain of mainstream politics is proving alarmingly successful.

David Broder is a historian of the Italian far-right. He is a regular contributor to the New Statesman and Internazionale, writing about Italian politics, as well as Europe editor for Jacobin. His writing has also appeared in the New York Times, the Guardian, the Independent, New Left Review and Tribune. He is the author of The Rebirth of Italian Communism: Dissident Communists in Rome, 1943-44 and First They Took Rome: How the Populist Right Conquered Italy.

'Meticulously researched and engagingly written by an author with a longstanding knowledge of Italy and interest in its politics and culture, this is a must read for all those who want to understand what is happening in the country and what may soon happen elsewhere.'

'Fascinating and trenchant, Broder's account of contemporary Italian neo-fascism - which is now in power in Italy - is both original and shocking. Broder shows through deep research into both the past and present of these politicians that we should take the threat they represent very seriously indeed'

- John Foot, author of Blood and Power. The Rise and Fall of Italian Fascism

‘Is it fascism really a “thing of the past”? Broder shines a light on what the Italian post-fascists keep in the shadows, the ferocity of their syncretic ideology, and their lumbering contradictions. A sharp, richly documented survey of the perennial — shameless — rebranding of the Italian far right, from historical fascism to the Present.’

‘This is a very important book that should be read by anyone concerned about the resurgence of far right and (post)fascist politics. David Broder provides a compelling historical account to illuminate the contemporary situation in Italy and ties it powerfully to the wider turn towards reaction. Broder succeeds in mapping how ideas we have been told were relegated to the dustbin of history have made their return to the mainstream. Beyond the significance of the book, Broder's writing style makes it both extremely accessible and engaging.’

‘For decades, antifascism was the “civil religion” of the Italian Republic. Today, “Mussolini’s grandchildren” lead the government. David Broder offers a very convincing interpretation of this unexpected historical metamorphosis and substantial arguments for understanding how to fight it. An irreplaceable book.’

'Deep historical knowledge and acute political analysis are combined in the first book explaining the rise of a post-fascist government in the land of Mussolini. While offering an evocative and unsparing fresco of recent Italian history, Broder provides the tools to understand the far right in power in democratic countries.'

Introduction: Mussolini's Granddaughters
1. The Victims of History
2. Exiles in Their Own Fatherland
3. A Party of Good Government
4. In-Laws, Outlaws
5. A Modern Right
Conclusion

END_OF_DOCUMENT_TOKEN_TO_BE_REPLACED
Back to Top
X