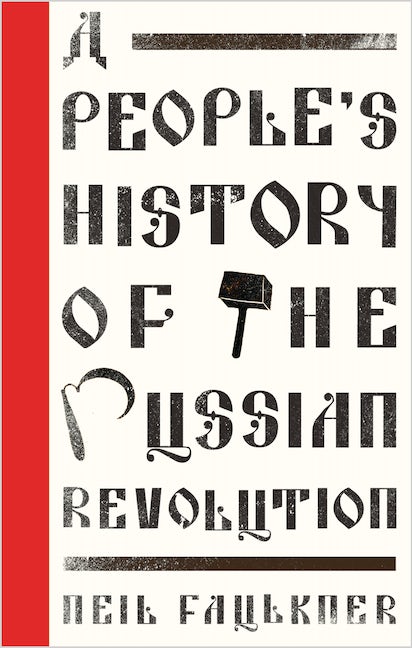 A People's History of the Russian Revolution

An alternative, narrative history of the Russian Revolution published in its centenary
The Russian Revolution may well be the most misunderstood event in modern history. In this fast-paced introduction, Neil Faulkner debunks the myths that continue to shroud it, showing how a mass movement of millions, organised in democratic assemblies, mobilised for militant action and destroyed a regime of landlords, profiteers and warmongers.

Faulkner rejects caricatures of Lenin and the Bolsheviks as authoritarian conspirators, 'democratic-centralists' or the progenitors of Stalinist dictatorship; though short-lived, the Revolution of October 1917 was an explosion of democracy and creativity. Crushed by bloody counter-revolution, its socialist vision was ultimately displaced by a monstrous form of bureaucratic state-capitalism.

Laced with first-hand testimony, this history rescues the democratic essence of the revolution from its detractors and deniers, offering a perfect primer for the modern reader.

'A People's History of the Russian Revolution, written by one of the finest historians on the left, is a vital contribution to the debate over the legacy of the Revolution and an essential defence of the revolutionary experience' - John Newsinger, author of The Blood Never Dried: A People's History of the British Empire 'Among the countless books which are beginning to appear as the centenary of the Russian Revolution approaches, there is a real need for a clear, historically reliable popular account from a socialist perspective. Neil Faulkner's A People's History is that account' - Neil Davidson, author of We Cannot Escape History: Nations, States, and Revolutions (Haymarket, 2015) 'A People's History of the Russian Revolution reeks of the vodka, blood, and gunpowder of one of the must vital and important periods in human history. It is a powerful book for an anniversary those in charge would rather we forgot' - Tansy E. Hoskins, author of Stitched Up: The Anti-Capitalist Book of Fashion (Pluto, 2014) 'Vivid and readable ... A valuable perspective on a world-shaking event' - Karen Shook, Times Higher Education 'Lively, sometimes contentious, and very readable' - Manchester Review of Books 'A very important contribution ... Very well-written [and] readable' - International Journal of Russian Studies
Series Preface
Acknowledgements
Dates, Names, Prices and Wages
Maps
Introduction
Part I: The Spark, 1825-1916
1. The Regime
2. The Revolutionaries
3. Lenin and the Bolsheviks
4. The Great War
Part II: The Tempest, 1917
5. The February Revolution
6. Dual Power
7. Counter-Revolution
8. The October Days
Part III: The Darkness, 1918-1938
9. World Revolution?
10. The Revolution Besieged
11. Stalinism
Epilogue: A Century of War and Revolution
Timeline
Bibliography
Index

Whose revolution? On the centenary of the October Revolution

The Meaning of October 1917

In order to fully understand the vodka, blood and gunpowder of the Russian Revolution, we must see it as a process, with October as the ‘supreme moment’.

END_OF_DOCUMENT_TOKEN_TO_BE_REPLACED
Back to Top
X