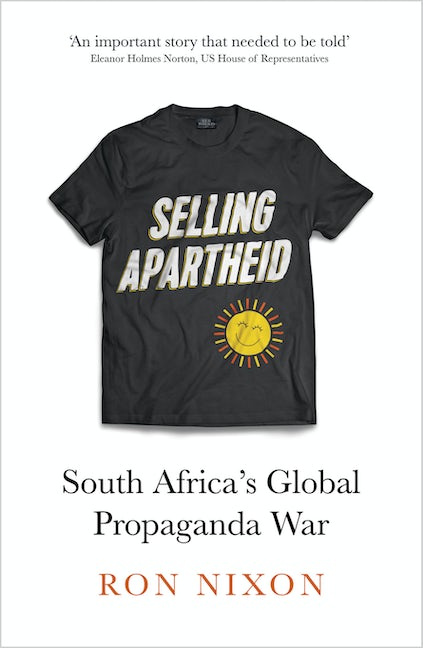 Tells the story of South Africa's shocking propaganda campaign which sold apartheid across the world
This book lays bare the global propaganda war waged by the South African government in the attempt to bolster support for their apartheid regime. The world-wide campaign consisted of the government burnishing its image overseas, selling apartheid to the US and the UK in particular.

Costing around $100 million annually, and run with vigourous efficiency for fifty years, the campaign drew in an elaborate network of supporters, including global corporations with business operations in South Africa, conservative religious organisations, and an unlikely coalition of liberal black clergy and anti-communist black conservatives aligned with right-wing Cold War politicians.

Journalist Ron Nixon brings together interviews with key players, and thousands of previously unreleased records from US, British and South African archives, to provide a fast-paced and historically rich account of a little-known history.

Ron Nixon is the global investigations editor for the Associated Press. Previously he was homeland security correspondent for the New York Times where he covered border and aviation security, immigration, cybercrime and violent extremism. He is the author of Selling Apartheid (Pluto, 2016).

'This is an important story that needed to be told about the apartheid government's global lobbying effort that tried to whitewash its reprehensible policy of racial separation' - Eleanor Holmes Norton, US House of Representatives 'A major contribution to the scholarship on the apartheid era and the struggle for liberation in South Africa ... One cannot understand the South African freedom movement without understanding the issues that Nixon so effectively presents to the reader' - Bill Fletcher Jr, former president of TransAfrica 'This is a tale of intrigue, rich characters and large chequebooks, played out in all the Western capitals' - Anton Harber, Caxton Professor of Journalism, University of the Witwatersrand 'Meticulously unpacks the complex web of relationships and covert money flows that promoted South Africa's repressive policies. At a time of widening alarm over the onslaught of 'fake news', Nixon provides a disturbing exploration of the extreme lengths to which institutions can go to spread misinformation' - Minneapolis Star Tribune 'Essential' - Ron Jacobs, Counterpunch
Introduction
1. Apartheid Is Good for Blacks
2. In Defence of Apartheid
3. Taking the Offensive
4. Operation Blackwash
5. Muldergate
6. Constructive Engagement
7. Free South Africa
8. Stopping the Anti-Apartheid Movement
9. Sanctions Only Hurt Blacks
10. The Fixer
11. Operation Heartbreak
12. The Anti-Sanctions Videos
13. Apartheid's Man in Angola
14. Apartheid's Last Gasp
15. The End of Apartheid
Notes on Sources
Acknowledgements
Index
Published by Pluto Press in Aug 2016
Paperback ISBN: 9780745399140
eBook ISBN: 9781786800022